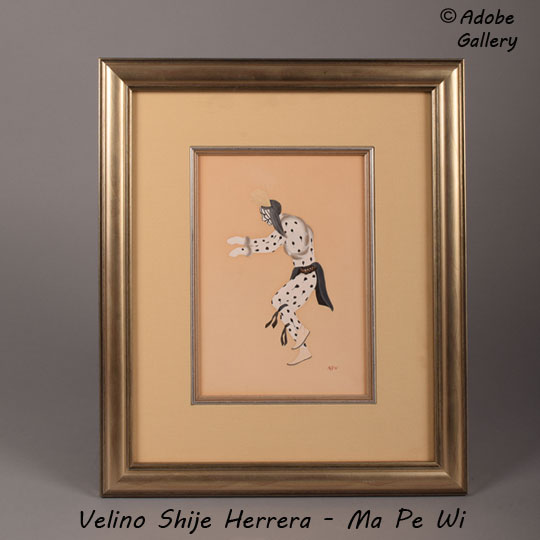 This excellent depiction of a Quirano Clown was painted by Zia Pueblo artist Velino Herrera. Clowns are part of the religious celebrations at all the pueblos. They may be called by various names—Tewa Clowns, Koshari, or Koosa—but their functions are similar. They are ribald entertainers who dance and cavort during breaks between pueblo dances. The Quirano clown portrayed in this painting is a figure that used to appear at the Tewa pueblos, but eventually disappeared for decades until returning recently. These clowns still appear at the Keres Pueblos of Cochiti, Santo Domingo, Zia, and others; they were just a few years ago reintroduced to San Ildefonso Pueblo by the society at Cochiti Pueblo.

This Quirano clown bends forward, raises one leg, and stretches his arms out horizontally. Herrera's work is great in every way, but what is most striking is the interplay between the opaque black and white paints that form the clown's body and body paint. Each tone is strong on its own, but together they have a powerful effect. Elsewhere, Herrera shifted to blurry grays, using wispier tones to form the clown's regalia. These subtle touches add depth to the image and elevate it beyond the two-dimensional norm. This is a fine example of Velino Herrera's work.

The painting is signed Ma Pe Wi in lower right. It is framed beautifully with museum protective glass and archival-quality materials.

Velino Shije Herrera (1902-1973) Ma Pe Wi (Oriole) was a Zia Pueblo painter. Herrera was born on October 22, 1902, at Zia Pueblo, to Reyes Ancero and Pedro Herrera. His cousin Jose Rey Toledo was also a painter. Herrera adopted his childhood nickname "Ma Pe Wi" as a nom de plume for his artwork. He lived and was educated in Santa Fe, New Mexico. He exhibited widely and successfully, was published in a long list of notable publications, and placed works in the collections of many major museums. Herrera passed away on January 30, 1973, in Santa Fe, New Mexico. Today, he is regarded as one of the most skilled and significant early pueblo artists.