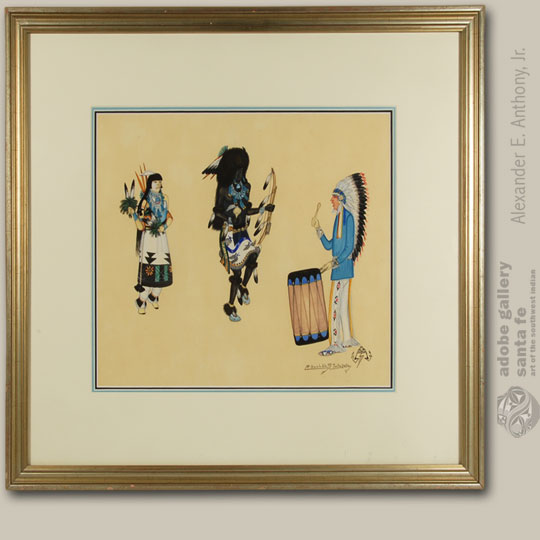 This painting represents participants of the Buffalo Dance at San Ildefonso as sponsored by the Summer Kiva, a dance reportedly not performed by this group in the last 25 years.  In this dance, there are only Buffalo Dancers, unlike the Animal Dances that feature Buffalo, Deer, Antelope and Ram Dancers.  This painting is excellent ethnographic documentation on a dance no longer performed at San Ildefonso but was performed when Tonita Vigil Peña (1893-1949) Quah Ah was a child living at the pueblo before her move to Cochiti Pueblo.  It is not likely that other artists of a later generation will ever paint this dance as they have not seen it and are not likely to see it in the future. Tonita obviously witnessed the dance and documented it well for future generations.

Tonita’s Tewa name was Quah Ah.  She did not have an easy early life.  She lost her mother and sister when she was 12 years old and then her dad sent her from San Ildefonso, her native pueblo, to live with an aunt and uncle at Cochiti Pueblo, so she essentially lost her father at that time as well.  She had to learn new customs, dances, songs and even a new language, Keres, which was spoken at Cochiti, rather than her native Tewa Language. She lived at Cochiti for the remainder of her life and passed away in 1949.

In 1908—at just 15 years old— Peña married Juan Rosario Chavez, who was 20 years old.  Chavez passed away three years after their marriage. She married Felipe Herrera in 1913.  He died in a work accident in 1920. Her third husband, Epitacio Arquero, outlived Tonita by a few years.  They had a loving marriage and produced five children.  By the time Tonita was 25 years old, she was a successful easel artist, and her work was being shown in museum exhibitions and in commercial art galleries in Santa Fe and Albuquerque. She painted what she knew best — scenes of life at the pueblo — mostly ceremonial dances and everyday events. She is still considered one of the best female Indian artists of all time.

This three-figure flat-style composition illustrates why Peña is such a notable figure in the world of Native art—not because of her status as a pioneering female, but because of the quality of her work.  Here, she presents an image that is at once charming and expertly crafted. On the left, a beautifully adorned female dancer carries evergreen boughs. On the right, a man wearing a long feathered headdress plays a Pueblo drum.  Each of these figures is turned towards the figure in the center: an intricately detailed buffalo dancer, pictured in motion. The dancer’s ceremonial regalia is, as per Peña’s usual, pictured in incredible detail. In an interesting outside-of-the-box decision, Peña placed the drummer slightly closer to the viewer than the other two dancers, adding a subtle bit of depth to this excellent painting.

Peña’s signature evolved over the course of her career.  Today, these variations inform collectors as they determine dates for her pieces.  In the early 1930s, she began using small combinations of cloud, rain, and storm motifs—like the one seen in this painting’s lower right corner—in conjunction with her name or names, sometimes using the names with the motifs. These became more intricate and complicated in design as time went on, and were used until her death.  Remarkably, Tonita never repeated the same design, but always used a different combination on each painting.

Condition: this painting of a Male and Female Buffalo Dancers with Drummer appears to be in original condition and framed with archival materials.

Provenance: from the personal collection of Santa Fe dealer and collector Martha (Marti) Struever who passed away in August 2017.  This painting was hanging near the front door of her home. 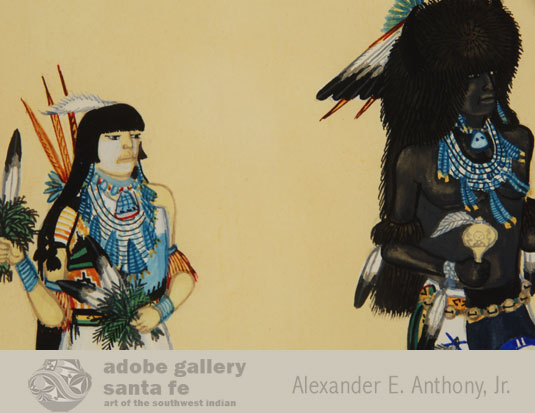