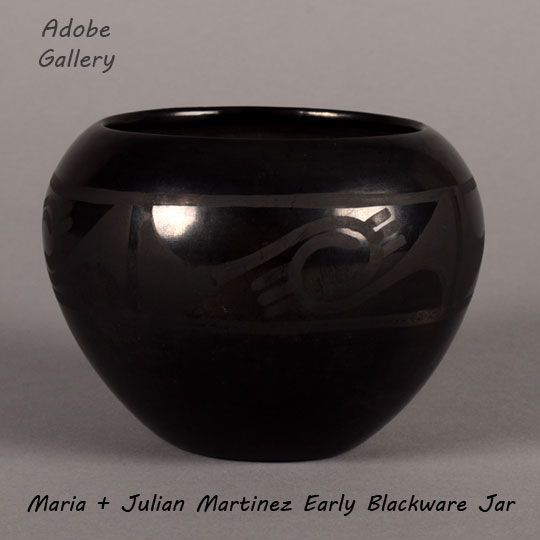 When turned in hand under adequate lighting, this beautiful jar crafted by Maria and Julian Martinez reveals information about its genesis.  In fact, each element of this vessel contributes to the story of its creation.  Julian decorated pieces made by him and his wife, and he is well known for reusing several Mimbres motifs.  Early in the timeline of pottery making, however, he did not repeat designs.

Represented four times, an original pictorial sits on a high band of painted decoration.  Its design elements become one central swirl, which resides at the center of this picture.  Three lines on each side of the swirl extend like rays of sunlight in a diagonal fashion towards the edges of the jar. Although the Mimbres feather design Julian used is perhaps the most recognizable, it is not every day one has the honor of beholding something that stands alone in the timeline of an artist’s evolution.

The shape of this jar is organic and very pleasing to the eye. A strong base curves up the sides in a “c”-like fashion, curling inward to create a semi-flat rim.  Everything but the matte decorative elements has been polished.  Although this jar is black, when examined closely there are elements that shine like the gunmetal finish that is also a possibility with clay from San Ildefonso.

These artists are not known for using the gunmetal finish at this time in their careers.  However, there is no way to say they were not experimenting.  Either way, it appears a small amount of oxygen made its way into the kiln fire at some point.  This resulted in a finish that is mostly black, but when turned under light fades into pools of a more reflective, metallic surface.  What a fortunate combination of events to occur, creating what is most definitely a one-of-a-kind piece. Pottery made by Maria Martinez (1884 - 1980) and painted by Julian Martinez (1885-1943) between 1925 and 1943 bears the dual signature Marie + Julian. By 1925, and until his death in 1943, Maria shared the signature with Julian.  Not only did the two share a marriage and four children, but they worked together.  Furthermore, although encouraged by outside influences to make pottery, it was the two of them who actually honed the black-on-black process.

Their initial attempts were very laborious for Maria, who would hand polish each piece. Maria was able to communicate this to her husband, and between the two of them they were able to discover that the piece could be polished in its entirety, and then, its ornamentation could be painted on in black. This finding not only made their days of creating and working together more practical but launched an entirely new design and category for pueblo pottery.  While Maria and Julian worked together for years, the amount of pottery signed by both is limited, one with an original design, even more so.

Condition: there are three small marks on one side of this Maria Jar, and overall, it is in very good condition.

Provenance: This Maria and Julian Martinez Early Blackware Jar is from a private California collection