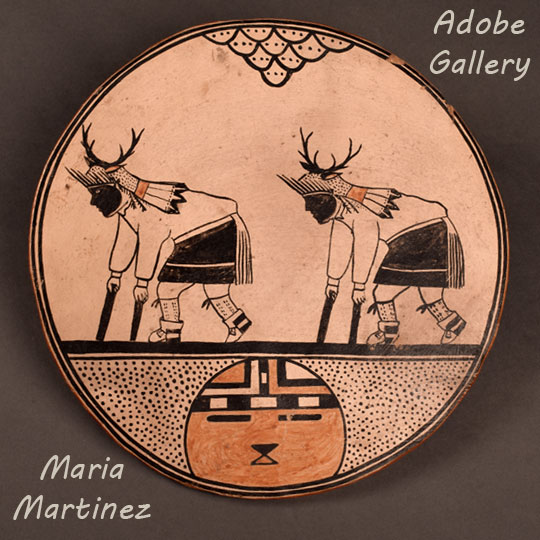 This is a rare Marie and Julian Martinez polychrome pictorial flat pottery tile of the type occasionally made by pueblo potters as wall hangings to be sold to tourists. This one, however, has no drilled hole from which to hang so the intent remains a mystery. Such an item is most unusual for Maria and Julian in that they mostly made jars and bowls.

There is another round pictorial tile published in the book on Maria by Richard Spivey referenced below, but it is smaller in size and has a single Deer Dancer. That tile is signed Marie, dated to circa 1925 and measures 9 inches. It is not known how many they made but only a few are known at this time.

This tile is more detailed than the published one. There are two Deer Dancers on this tile and they have sticks in their hands representing the front legs of the deer that they are emulating. Below ground level is the rising sun and above the dancers are rain clouds. The rear leg of each dancer is raised slightly signifying movement of the dancers. This tile is not signed and is probably earlier than the 1925 published one.

Tiles of this style possibly have a precedent in wall-hanging cornmeal founts. Such items would have a flat back and an extension on the front to serve as a well for holding sacred cornmeal. Perhaps the front well was eliminated when making one for sale.

Maria Martinez was a remarkable woman who exposed to the world a pueblo craft that existed for a thousand or more years as functional ware, but her introduction to outsiders revealed the artistic value of those clay objects. She not only elevated pottery from San Ildefonso Pueblo to a highly collectible object, she, in doing so, helped potters at all the pueblos find a source of livelihood for their efforts.

Maria would be the first to deny her importance but, at the same time, she would be pleased with her legacy as it benefited her family and friends. Maria was an artist who plied her craft every day of her adult life because she enjoyed what she was doing. There was tragedy in her life in that she lost a husband and three sons yet she was able to overcome those losses through her personal strength.

Maria and Julian were a perfect match. She was an experienced potter and he an experienced painter and together they began re-energizing Polychrome pottery at the pueblo. Julian was working with anthropologists exploring prehistoric sites at Pajarito Plateau, now known as Bandelier National Monument. Maria and Julian gathered potsherds at the site and excitedly began making them come to life again. They placed these designs on Polychrome pottery which was the predominant type at the time. This was in 1908.

Maria and Julian continued making Polychrome pottery even while beginning to experiment with polished blackware. They did not abandon Polychrome at that time but devoted more time to blackware.

Condition: this RARE San Ildefonso Pueblo Polychrome Pictorial Flat Pottery Tile by Marie and Julian Martinez is in excellent condition with only a couple of minor chips at the upper edge.

Provenance: formerly located in a lodge in the Midwest, mounted on a board.  The board was successfully removed.