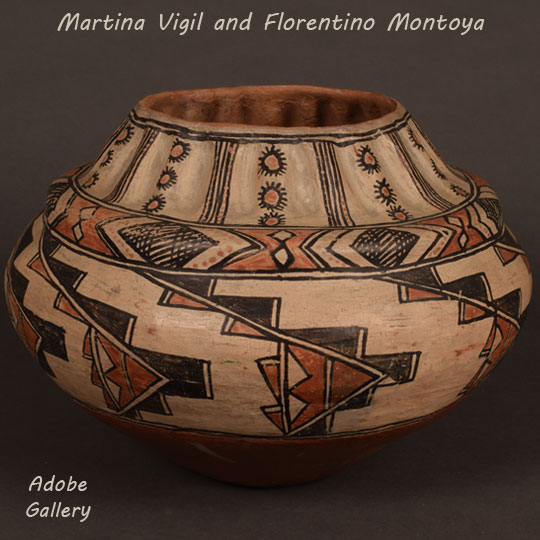 This gorgeous polychrome OLLA was made by Martina Vigil and Florentino Montoya of San Ildefonso Pueblo. Martina and Florentino produced some of the very finest San Ildefonso pottery of the late nineteenth and early twentieth centuries. Their works are unique and easily recognizable, which makes confident attributions possible. Their wonderful polychrome pots are included in the collections of the Metropolitan Museum of Art and other major museums.

Martina and Florentino were a gifted and influential team. As was often the case with husband-and-wife collaborations, he painted the designs, and she made the vessels. Their works are bold and elaborate, but few would describe them as excessive in any way. Rather, the strong, complex designs always seem to be perfectly in sync with their vessels' forms.

With this historic pottery water jar, both Martina and Florentino made bold decisions with visible skill and confidence. Martina embellished the traditional OLLA shape by adding a raised shoulder. A strong neck with vertical ribs impressed into the clay rises from the shoulder. Florentino's work is similarly elaborate, covering much of the OLLA's exterior in black and red designs. Complex diagonal patterns of diamond-shaped and triangular forms appear in the two lower design bands, suggesting feelings of motion and energy to the viewer while incorporating traditional symbols and designs. Florentino highlighted the ribbed neck by adding patterns of vertical lines and circular forms, which alternate with each raised band of clay. The three design bands complement one another and the vessel itself wonderfully. This is an excellent example of Martina and Florentino's remarkable pottery.

Martina Vigil (1856-1916) and Florentino Montoya (1858-1918) were a married couple from San Ildefonso Pueblo. As Jonathan Batkin has documented, there were several outstanding potters at San Ildefonso Pueblo during the late 1800s and early 1900s whose work can accurately be associated with their names. Following publication of Batkin's studies, it has become easier today to identify late 19th and early 20th century pottery to artists with some degree of accuracy, or so we hope. Due to their unique style, Martina and Florentino are among those artists whose works can be accurately identified. Martina and Florentino were cited as a major influence by Maria Martinez. As of 1999, one of their works held the record for the highest price paid for a single pot in the Western Hemisphere.

Condition: excellent condition with one small crack and chip at the rim, both of which have been stabilized.