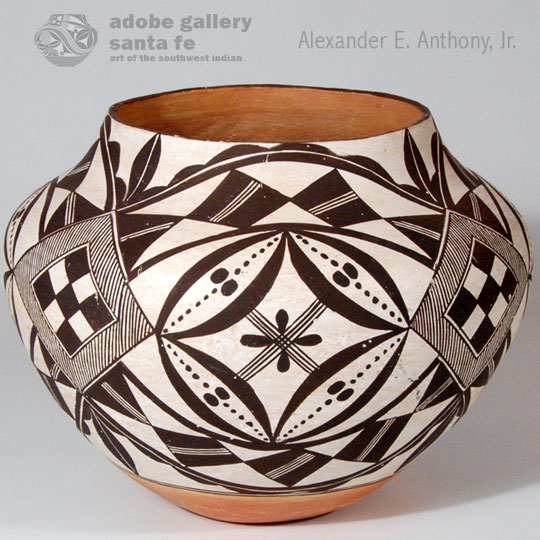 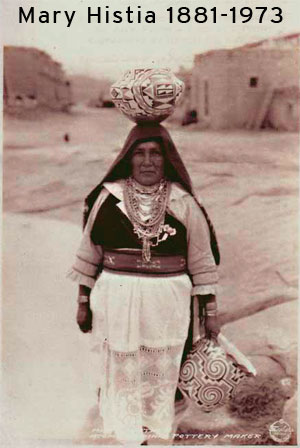 This Acoma jar by Mary Histia was a gift from the potter to Maureen Grammer of Albuquerque in 1966.  Grammer, a resident of Albuquerque since 1926 passed away in 2004. She had been a teacher in the Albuquerque Public Schools until her retirement.  She had obtained BA and MA degrees from the University of New Mexico. After her retirement, she concentrated on working in the fine arts and Indian arts appraisal business and on writing for magazines.

Mrs. Grammer was a well-known student of American Indian arts and was a noted appraiser of Indian arts for decades.  She identified unsigned works by Native artists and was accepted as a knowledgeable expert on the subject. It is not unusual to see statements saying “Maurine Grammer said . . .” or “according to Maurine Grammer . . .” and such statements are accepted as fact.

In this Acoma jar, a hand-written entry on the underside states “Mary Histia Acoma 8-4-66 Potter for Presidents.” According to Maurine’s granddaughter, who brought the jar to us, that entry is in Maurine’s handwriting.  After Maurine passed away in 2004, the jar was given to her daughter, and is now being sold through her estate.

The statement “Potter for Presidents” refers to Mary Histia being commissioned by President Franklin D. Roosevelt to make pottery during the National Recovery Act in the 1930s.  She made pottery with the NRA blue eagle logo.

This gift from Mary Histia to Maureen Grammer is a traditional Acoma jar with geometric black-on-white designs.  It is probably safe to say it was made in 1966, or close to that, as that is the year Maurine Grammer noted.

Provenance: from the collection of Maureen Grammer, through the estate of her daughter. 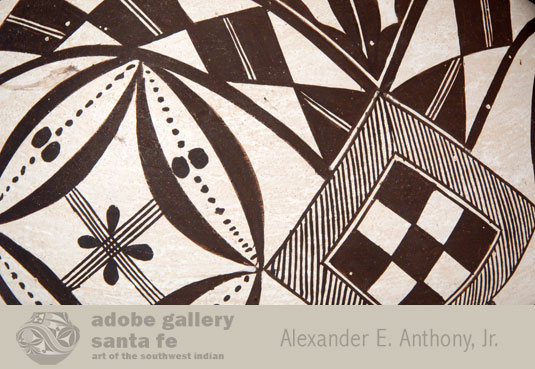 Acoma - The People of the White Rock [SOLD]
by