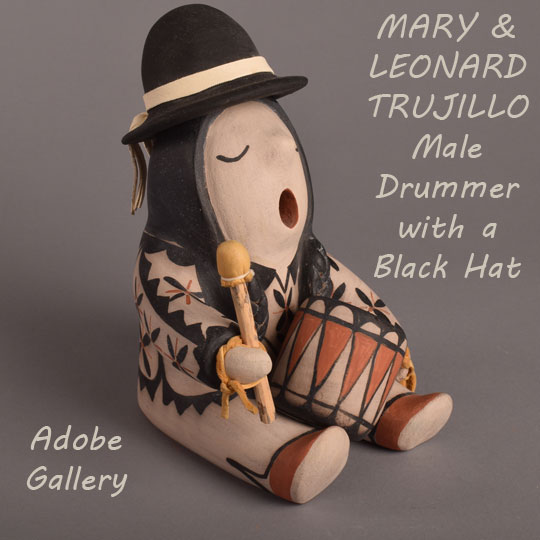 This Cochiti Pueblo pottery drummer figurine was a collaborative effort by Mary and Leonard Trujillo.  Mary made figurines on her own but Leonard assisted her with some of the tasks, such as digging the clay and working to make it ready for Mary to use in fashioning figurines.  He also made drums and drumsticks.

This drummer is seated, has braids and a black hat, and has his eyes closed and mouth open in song.  The drum is clay and tied to his left hand.  In his right hand is a wood drum stick.  He wears a beautiful patterned shirt.  Mary is quoted as saying she puts braids on her males in honor of her grandfather because he wore braids.

Mary Trujillo (b.1937) was originally from Ohkay Owingeh Pueblo, the daughter of José and Leonidas Cata Tapia. Mary was mentored by her mother, who was an excellent San Juan pueblo potter.  When she married Leonard Trujillo [b.1930s - ?], she moved to Cochiti and has lived there since. Mary soon switched from San Juan style pottery to Cochiti style, under the tutelage of Helen Cordero. Leonard Trujillo was the adopted son of Helen Cordero.  Mary first made pottery figurines in the early 1980s.  She still lives at Cochiti but is no longer active in making pottery.

We purchased this from Mary and Leonard in 1991 and sold it to the client from whom we now have it back.  The figurine is in original condition.