GEORGE CORDERO Male Storyteller with 2 Children and a Drum 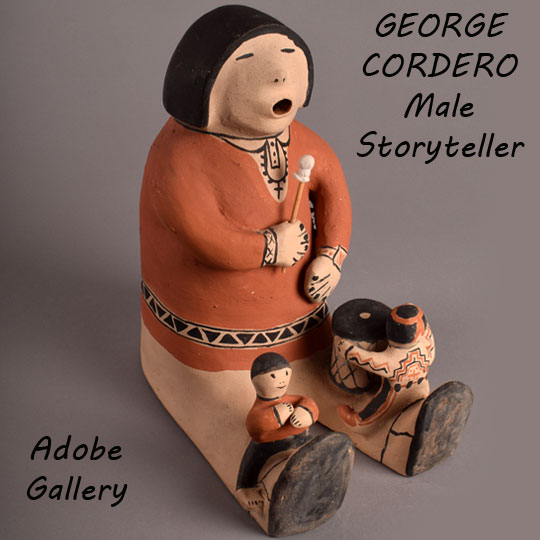 Cochiti Pueblo artist George Cordero (1944-1990) made this male storyteller as one who is chanting and drumming rather than telling a story.  He is singing to the two boys on his legs.  One of the boys is joining him in drumming.

The male has a rust red shirt with a button collar.  He wears a pueblo cross necklace, has a decorated belt and traditional moccasins.  One of the boys is dressed in a fashion similar to the adult, and the other one is dressed in a very elaborate painted design.

Condition: this figurine is in original condition with the exception that the drumstick belonging to the small boy is missing.

Provenance: this GEORGE CORDERO Male Storyteller with 2 Children and a Drum was purchased by Adobe Gallery in 1999 from an individual and sold to the current owners.  It was most likely made in the 1980s, a time when George was more actively making pottery.