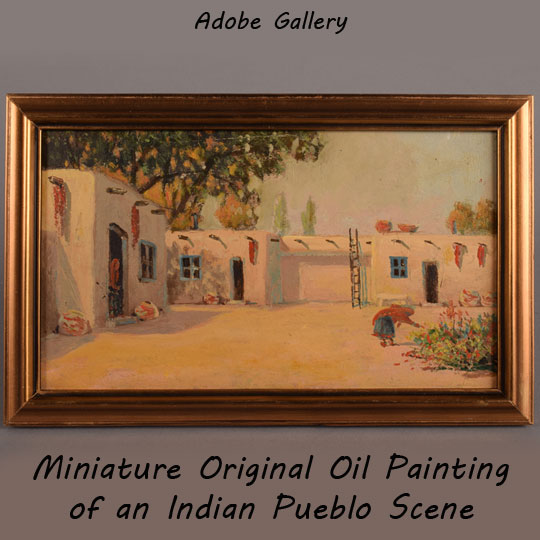 This petite unsigned oil painting is a peek into Pueblo life.  Well-kept adobe homes are tended by two women.  One stands overlooking the other from a door frame.  The other woman tends to her flowers in the courtyard.  This appears to be a late summer scene, with green leaves on the deciduous trees which are beginning to change; now viridescent trimmed with gold.

Shadows have been playfully represented with strokes of blues and are offset by striking swathes of red with ristras hanging from vigas, decorating the buildings in ornaments of the southwest.  Finalizing the scene are many large ceramics, common of the Pueblo people.  One or two beside each door, there is even a set of two on the roof of one building.

It is hard to date this painting.  Those of you who have had the pleasure of experiencing the area will know, when tended to, that adobe buildings of the southwest will last well over a hundred years.  While it is likely a scene of Pueblo life of around the 1930s, it is wonderful and easy to imagine it is ageless.

Although this painting was acquired along with a dozen signed paintings by Taos Pueblo artist Albert Lujan, this one does not have the signature of an artist.  It is unlike those painted by Lujan, as his paintings invariably featured the multi-storied Taos Pueblo plaza buildings.  This one appears to be a home away from the plaza at Taos Pueblo.

Condition: this painting is in very good condition