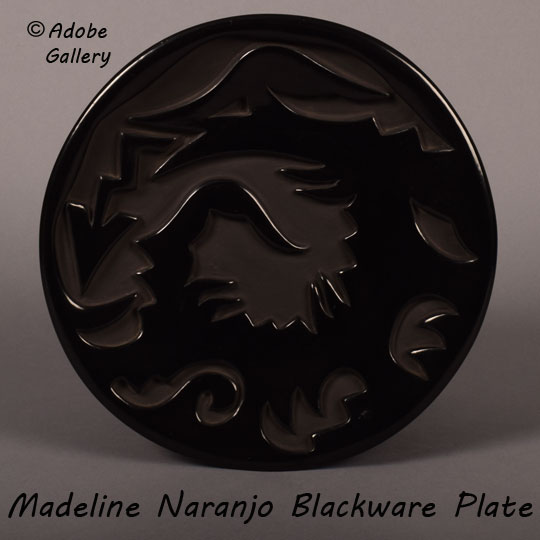 This polished blackware plate was created by Madeline Naranjo of Santa Clara Pueblo. Naranjo's life and career were long and fruitful, and her work is widely and enthusiastically collected. This beautiful piece of pottery reminds us why Naranjo's work is so highly regarded. The design is at once traditional and inventive, and the carving is deep and precise. The polish is remarkable, giving the uncarved areas an appealing sheen.

At over a foot in diameter, this a large piece. Naranjo chose to scale up a single design to suit the size of the plate rather than adding additional designs to fill space, and that was a wise decision. The viewer is treated to a massive Avanyu (water serpent) head which, including its lightning tongue, occupies nearly a third of the plate's surface. The water serpent's form continues, curving within itself into a spiral, with additional abstract elements floating around the edges. This is a strong design, and it suits the plate perfectly.

The back of the plate is signed Madeline Naranjo, Santa Clara Pueblo.

Madeline Naranjo (1916-2020) was an active potter beginning in the mid-1930s. She won many awards for her blackware pottery, including numerous ones from Santa Fe Indian Market, the New Mexico State Fair, and the prestigious New Mexico Governor's Award. I first met Madeline and her daughter, Frances Siow, in the early 1980s when I was purchasing pottery from both. We sold their pottery at the Albuquerque gallery for at least 20 years. The last Santa Fe Indian Market that she participated in was in 1994 during which she was awarded a ribbon for a carved bowl. Madeline was the wife of Jose G. Naranjo; mother of Fidel Naranjo, Frances Siow and Joseph Naranjo. She is known for her carved blackware bowls, jars, plates, and engagement baskets with carved designs going up the handles. Madeline had a long and distinguished career. She died in 2020 at the age of 104. She was an active potter for about 75 years. She will be missed by many collectors who cherished her work.

Provenance: this Polished Blackware Plate with Avanyu Design is from the collection of Bob & Louise Sluder, Dealers/Collectors active from 1955 to 1990