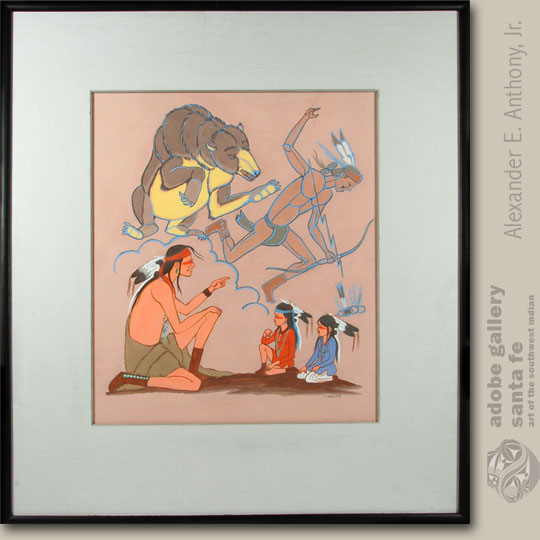 This appears to be a very early painting by Andrew Van Tsihnahjinnie (1916 - 2000), possibly one painted while attending the Santa Fe Indian School.  The style not that of an accomplished artist but of a talented student, and the mat board appears to be hand cut.  Nonetheless, the painting was very well executed and illustrates why Dorothy Dunn thought so highly of Andy Tsihnahjinnie as an artist.  She stated that Tsihnahjinnie "had no equals among the artists of the [Santa Fe Indian School] studio and perhaps few superiors among modern painters. If equanimity and self-confidence were to rule his artistic abilities, Tsihnahjinnie might well be one of America’s top-ranking painters.”

This painting pays homage to the Native American tradition of oral storytelling. A Diné man is pictured kneeling, with young children gathered in front of him.  They listen intently as he relays a story, which is shared with the viewer via the upper half of the painting.  The two halves are separated by a blue cloud formation—a device used often by early Diné artists to separate an image's spiritual or metaphorical imagery from its depiction of the physical, literal world.   It involves a bear and a hunter whose bow is loaded with a lightning bolt.  The bear and hunter are outlined with a touch of bule, which matches the cloud formation.  The bear and hunter are muscular and full of energy; the storyteller and his audience are at ease.

We are reminded by this painting that there was a time when stories about great deeds of the past were verbally relayed to the younger generation. It was in this way that lore and legend were passed from one generation to the next, as there was no written Diné language until after World War II. It was for this reason that the Marines were able to use the famous Diné Code Talkers for passing encrypted instructions during the war.

Tsihnahjinnie's works do not pass through the gallery often.  This rare early piece is an exciting opportunity for collectors of Diné paintings.  It is signed "Tsinajinie" in lower right and placed under a wide mat within a simple black frame.

Condition:  this painting of a Navajo Elder Storyteller and his Young Audience is in very good condition—no noticeable faults.  There are some pencil marks and smudges which appear to be inherent to the piece.

Reference:  American Indian Painting of the Southwest and Plains Areas by Dorothy Dunn.  This book is currently not available from Adobe Gallery

Provenance: from the estate of a New York resident 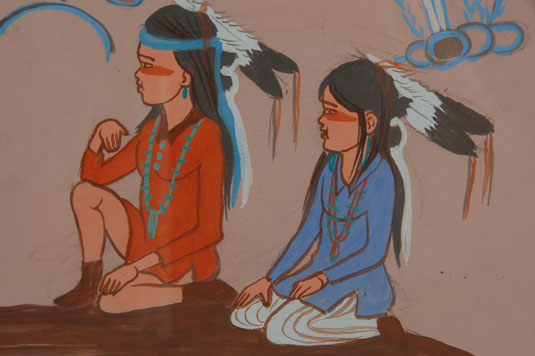