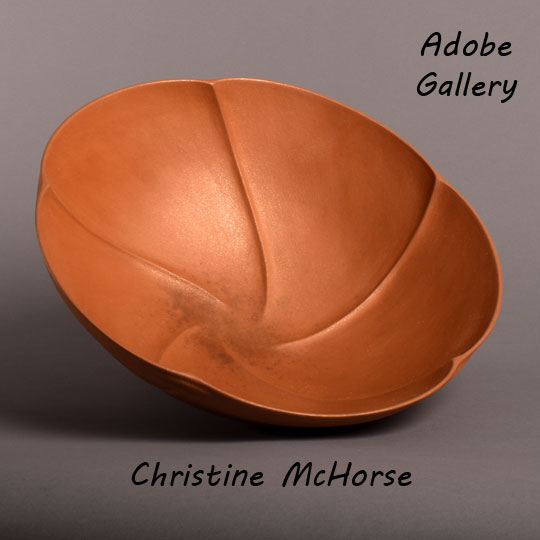 This beautiful open pottery bowl was formed into a shape Diné of the Navajo Nation artist Christine McHorse described as a lotus leaf.  There is a pedestal circle on the bottom, and the bowl expands outward in a graceful rise to the rim- pivoting around what appear to be fire clouds.  Fire clouds appear when the fuel touches the pot during the firing process. There are ridges on the interior as would be leaf stems in nature.  A raised one-inch band encircles the rim on the exterior.  The bowl was purchased directly from the artist at Santa Fe Indian Market in 2004.

Christine McHorse (1948-2021) Nofchissey was an innovative potter who successfully combined the techniques and materials of traditional pottery with contemporary non-traditional forms and firing methods. She used micaceous clay taken from the mountains near Taos to hand build her vessels using the coil method.

Christine was Diné. She married into the Taos Pueblo heritage where she was introduced to the mica-speckled clay by her husband's grandmother, Lena Archuleta, who had a curio shop in Taos. Her first formal training began at the Institute of American Indian Arts, which she attended beginning at age 13, when the institute was still a high school. Today, we see in Christine's work an ingenious combination of innovation and tradition, typical of the finest Navajo crafts.

Provenance: this Navajo Lotus Leaf Open Pottery Bowl by Christine McHorse is from the estate of Henry Christensen III, attorney at law in New York, who purchased the bowl from the artist at Santa Fe Indian Market in 2004.