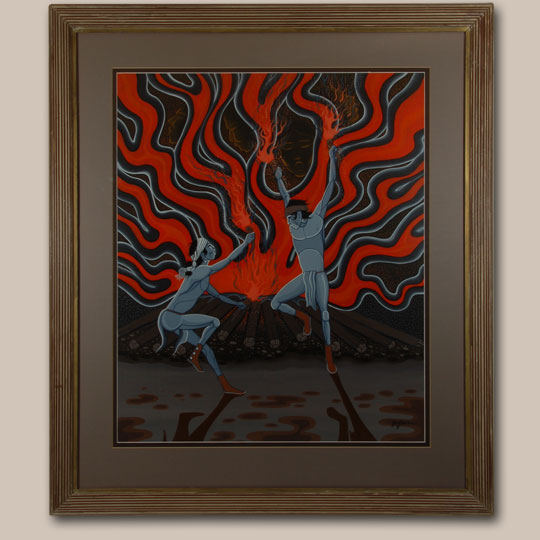 This large painting of a Diné Fire Dance is one of the finest Beatien Yazz paintings we have seen.  Yazz is known for using strong colors to create spirited, appealing figures.  Many of his images are serene and beautiful depictions of life in the Navajo Nation.  This piece proves that Yazz created wild, dramatic images just as adeptly as he did calm, decorative scenes.  Here, he manages to elevate the intensity without sacrificing any of the beauty.

The painting features two Diné Fire Dancers in front of a massive formation of bright orange flames.  The dancers hold lit torches and wear loincloths, moccasins, and headbands.  Their bodies are stylized in a most appealing manner, elevating the lean, muscular dancers’ spectacular movements.  The painting’s most appealing element, however, is actually the background—an enormous fire rises from a circular band of logs, covering the upper two thirds of the image in vibrant orange.  Dark blue and wispy white accents surround the edges of each column of flame.  They branch off one another, dividing into smaller flames and ultimately extending in every direction but down.  Four faces appear in the orange-spotted sky, which is rendered barely visible by the fire’s extraordinary presence.  This is a truly exceptional example of Beatien Yazz’ work.

The painting is signed B.Yazz in the lower right.  It is framed under glass and two layers of gray matting in a carved wood frame.

Provenance: this Painting by Beatien Yazz of Diné Fire Dancers if from a private Santa Fe collection