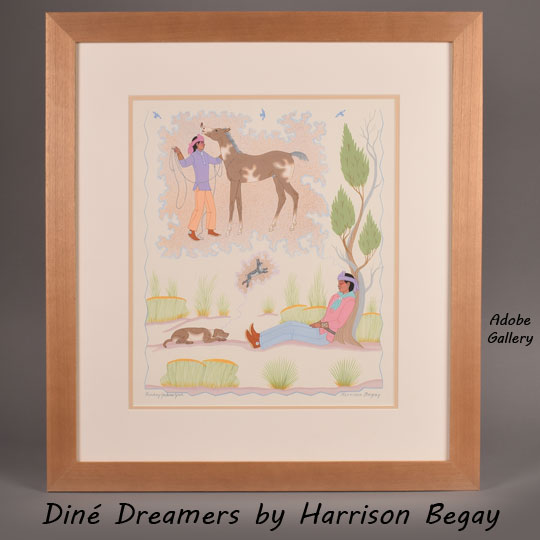 This original painting was created by influential Diné artist Harrison Begay.  Stylistically, it is classic Begay—soft pastel colors, detailed linework, subjects depicted in profile, a generally warm and appealing tone.  As far as subject matter goes, it is a unique offering, but one that still manages to include many of Begay’s favorite figures.

On the right side of the image, a young Diné man takes a nap, resting against the trunk of a thin tree.  His dog rests at his feet, also snoozing.  The man dreams of interacting with a horse. He smiles as the horse nips at a feather attached to his headband.  His dog is dreaming, too—of a jumping rabbit, which he’d certainly chase if given the chance.  These Diné dreamers’ visions are framed within smoky clouds of pastel tones, with colorful atomized backgrounds.  This Harrison Begay painting is sweet, beautiful, and unique.

This painting is signed Harrison Begay in lower right and Haskay Yahne Yah in lower left.  It was recently framed under crisp white mat, in a simple wood frame with a tan tone.

Harrison Begay (1917-2012) Haskay Yahne Yah - The Wandering Boy was a world-renowned Diné (Navajo) painter who is generally regarded as one of the most successful and influential early Native American painters.  Begay studied under Dorothy Dunn at the Santa Fe Indian School in the 1930s, and then attended colleges in North Carolina and Arizona. From 1942 to 1945, he served in the US Army Signal Corps.  In 1947, Begay returned to the Navajo reservation, where he enjoyed a long and productive career as a painter. He is known to have continued painting into his 90s. Begay passed away in 2012, leaving behind a large body of work and a legacy in the world of Native art.

Provenance: this Original Painting of Diné Dreamers by Harrison Begay if from the collection of a resident of New Mexico Navajo: Visions and Voices Across the Mesa (SOLD)
by Shonto Begay