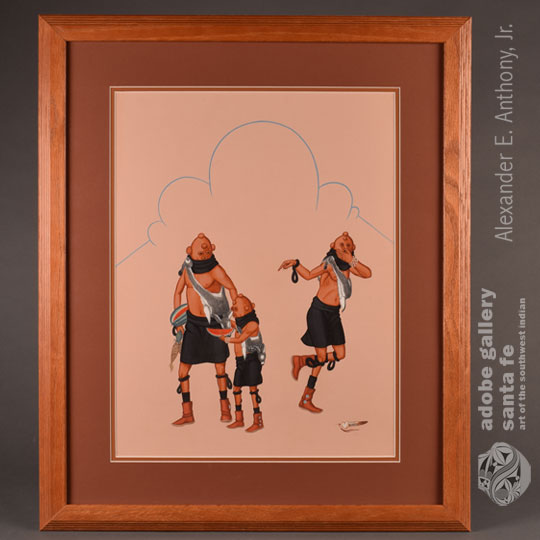 This painting by Diné artist Johnny Secatero features a Native American figure with enduring popularity: Koyemsi, or “Mudhead.”  Secatero, who was Diné, is known to have painted Zuni, Hopi, and other pueblo imagery during his career. Here, he features three Mudheads, one of which is very small.  This miniature Mudhead is likely embodied by a young man who has just recently been initiated into the Kachina society. A larger Mudhead, holding watermelon and corn, appears to look on as his smaller companion stares at a slice of fruit.  The third Mudhead covers his mouth and points, as if laughing at the small Mudhead. Secatero handled the scene with skill, despite the potentially challenging direction from which they are seen. Careful shading and strong, thick outlines work very well here, as do the simple cloud designs which float above the scene.

Barton Wright’s Kachinas: A Hopi Artist’s Documentary provides a strong description of Koyemsi’s appearance and function: “Koyemsi or Mud-head Kachinas are probably the most well-known of all the Hopi Kachinas. They appear in almost every Hopi ceremony as clowns, interlocutors, announcers of dances, drummers, and many other roles. Koyemsi are usually the ones that play games with the audience to the accompaniment of rollicking tunes. These games are generally guessing games, or simple attempts to balance objects or performances of some common act.”

This painting is signed Johnny Secatero in lower right with his hallmark feather. It is framed under glare-resistant acrylic in a simple frame, with two layers of matting in complementary colors.

There is not much available information about Diné painter Johnny Secatero (1945 – 2010). Clara Lee Tanner’s book Southwest Indian Painting: A Changing Art points out the visible influences of Harrison Begay and Robert Chee, and notes that Secatero occasionally painted in the pueblo style.  He placed in multiple major shows in the late 1960s. He took first in the traditional-representational category and received a grand award at the 1971 Gallup show.

Condition: this Untitled Navajo Painting of Mudhead Trio by Johnny Secatero is in excellent condition