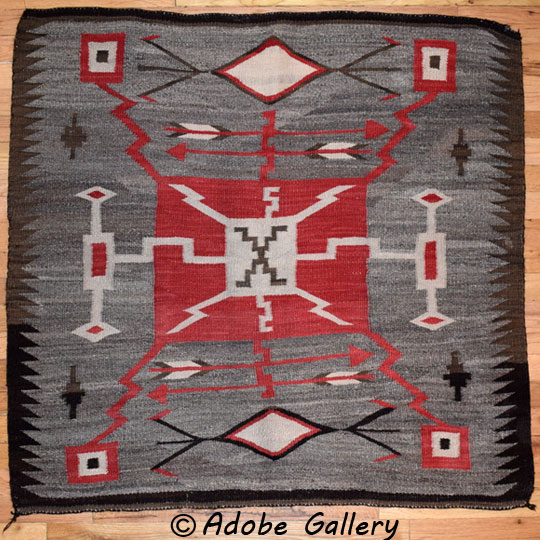 The uniqueness of this Navajo Nation textile is its representation of a Storm Pattern rug in a square format. I do not recall ever seeing a Storm Pattern rug in this arrangement. Even in this shrunken layout, all the elements of a Storm Pattern rug were included by the unidentified Diné of the Navajo Nation weaver, and nothing was eliminated. It appears to date to around the late 1930s. The gray background is a beautiful mixture of black and white wool that was carded to reflect varying tones of color. The white and brown are natural sheep's wool without mixed carding. Red is the only dye in the rug.

The design in the center of the rug has been described as the place of emergence of The People. The four squares in the corners of the rug represent the four sacred mountains which are at the edge of and define the Navajo Reservation. The black, white, and red images at the center edge of both ends of the rug represent water bugs. In earlier, pre-1930s Storm Pattern rugs, whirling logs would appear in the area above the water bugs. In this textile, the whirling logs were replaced with a pair of arrows, each pointing in different directions.

Despite misinformation from early dealers and traders (going back to J.B. Moore and his catalog of 1911) and unfortunately persisting to the present; the Storm Pattern is not religious in nature, relating to no known dry painting pattern. This pattern originated in the Western part of the Reservation and was adopted by traders like Moore into the general repertoire of available patterns at Crystal Trading Post. Kate Peck Kent makes mention of this pattern's use on flour sacks in the late 1890s (Rodee, 1995:157).

Warp and Weft:  "All twill weaves are produced by floating the weft elements over more than one warp at a time to create a raised pattern of color and texture. Three twill-weave techniques were used by both Navajo and Pueblo weavers: plain twill forming diagonal floats; herringbone twill, in which the diagonal floats alternate direction to form a vertical zigzag or chevron pattern; and a diamond twill, in which the herringbone patterns are woven in such a manner as to create concentric diamond patterns." Reference: Kaufman, Alice and Christopher Selser. The Navajo Weaving Tradition 1650 to the Present: page 138.

Provenance: this Navajo Pictorial Rug in Storm Pattern Design is from the collection of a client from California