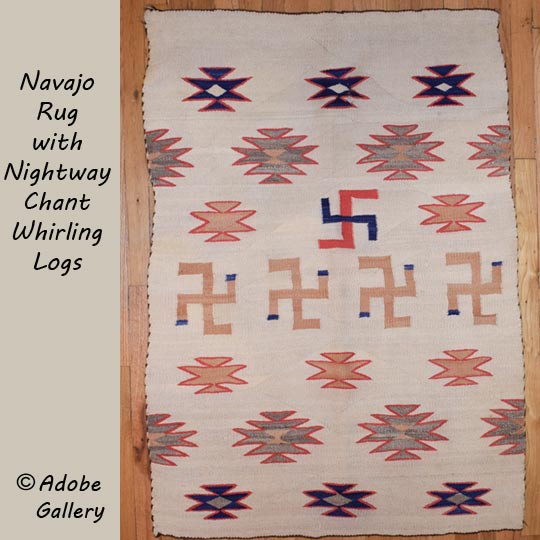 Navajo textiles woven following the return of the Diné from Bosque Redondo to their homeland retained features of the blankets woven before their incarceration. One of those features was a borderless textile. Wearing blankets did not have borders, nor did earlier floor rugs.

This textile is typical of the early rugs and likely dates to the early 1900s, perhaps to 1910. The white background wool is soft texture and probably from churro sheep raised by the weaver. Each of the snowflake designs is outlined in red. The three patterns nearest the border are dark blue, the adjoining row is a carded white and gray wool surrounding a small hourglass of beige color, and the two in the next row are of the same beige color.

The four Whirling Logs of beige color have legs tipped in dark blue. The single Whirling Log design is a mixture of red and blue. The Whirling Log element, sometimes referred to as a Swastika, needs clarification as it is a design lifted from a Navajo ceremonial sandpainting from the Nightway ceremony. It is realized that this explanation will not overcome the hurt and anger associated with the Swastika, but hopefully it will soften the impact once understood in relation to the Diné people. This symbol was popular throughout the reservation in the early 1900s, but was discontinued in use by the Diné in the early 1930s, likely influenced by traders who explained the current impact of the symbol.

The red dye is from an aniline source. It is difficult to determine if the dark blue is indigo or an aniline dye. Its richness in color would make one suspect it was indigo dye.

The current owner stitched a strip of cloth at the top of the textile in which to insert a rod so that the rug could be displayed on a wall. The strip of cloth can be removed if one chose to use this on the floor rather than on the wall.

Provenance: this Navajo Rug with Nightway Chant Whirling Logs is from a Santa Fe resident who purchased it in the early 1970s from Rick Dillingham and Joe Carr when they shared a business in Santa Fe.