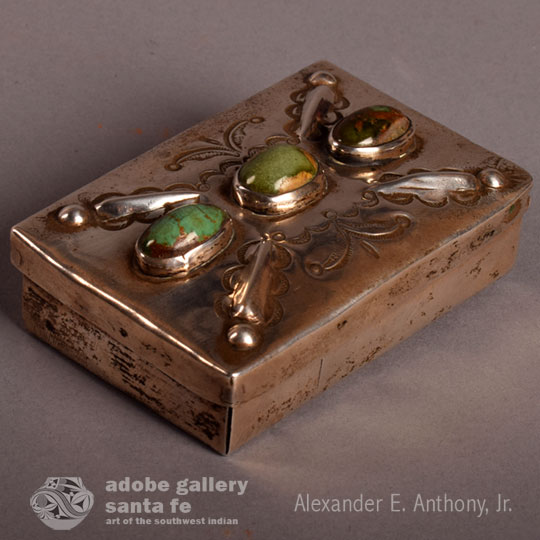 This Navajo sterling silver box is topped by a separate and removable lid which serves as host to three beautiful green turquoise gemstone, each of which displays a copper matrix.  The lid was also stamped with a fleur de lis design and four repoussé elements. The bottom of the box is silver with no designs.

With the arrival of the railroad in 1880, artisans began creating non-traditional objects for sale to the tourists traveling the Santa Fe Railroad. The production of non-traditional items to sell as souvenirs such as boxes, ashtrays, letter openers and flatware became less difficult when artists were able to obtain sheet silver from the trading posts in the early 20th century. Along with the availability of sheet silver, which made the fashioning of boxes much easier, designs became more complicated and turquoise was added as a design element.

This box is an excellent example of the style made in the early twentieth century by Dine artisans.  Typically, it was not signed with the name of the artisan.

Condition: this Diné Silver and Turquoise Lidded Box is in  very good condition.  One corner seam of the silver base has lost it solder but is still secure.

Provenance: from a gentleman from the Washington, D.C. area Beesh Ligaii In Balance: The Besser Collection Of Navajo And Pueblo Silverwork
by John Torres-Nez