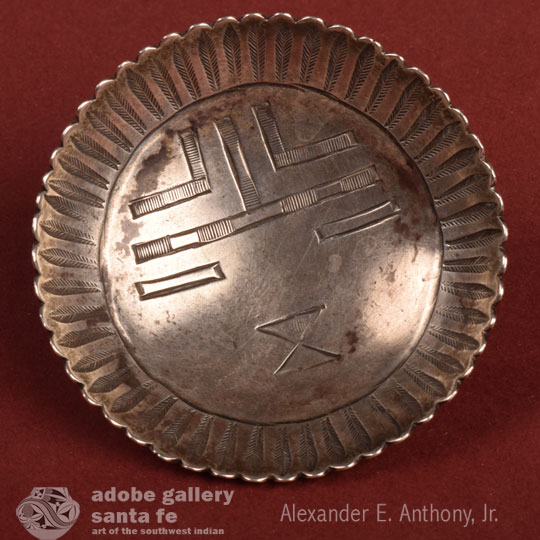 A Zuni Sunface is stamped on the interior of this small silver bowl. The artist—either Diné silversmith Ike Wilson or his wife Katherine Wilson—used a series of rectangles and triangles to create the Zuni Sunface symbol. The Sunface is an ancient symbol in the Zuni culture, where it represents the sacred Sun father. Surrounding the center section of the bowl, the artist used a series of feather stamps on the silver–representing the warming rays of the sun. The bowl was expertly crafted with the edges delicately scalloped to resemble the tips of feathers. The silver stamped bowl is signed with Ike Wilson’s bow and arrow hallmark.

As an interesting side note to this piece, there has been some confusion in the past about the hallmark of Ike Wilson (1901-1942). It seems that sometimes his work was attributed to Austin Wilson. Both men were born in the same year and in a similar area of the reservation and both men worked at times for trader C. G. Wallace and the Kelsey Trading Company.  Ike Wilson’s work is signed with a bow and arrow. After his death in 1942, his wife Katherine Wilson (1907-1985) continued to use his hallmark. The bow and arrow hallmark was initially attributed to Ike’s contemporary, Austin Wilson, but the corrected attribution was published in Messier, 2014.

Ike Wilson worked for many years for the Kelsey Trading Company at Zuni. He did silverwork for many of the Zuni lapidary artists including Ida Vacit Poblano.  He often collaborated with his wife.

Condition: The Navajo Small Round and Deep Silver Bowl with Sunface Design by Ike Wilson n is in excellent condition

Provenance: from the collection of a Washington, DC gentleman