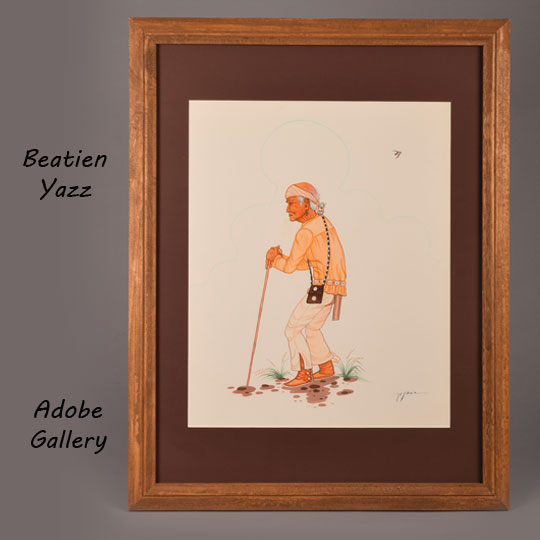 This untitled watercolor painting was created by Diné artist Beatien Yazz.  For this piece, Yazz shifted his focus away from ceremonial scenes and animal imagery in favor of a sweet portrait of a Diné elder of the Navajo Nation.  While the primary subject is atypical, the painting’s basic composition—a cluster of forms representing the earth, a thin cloud formation with a bird nearby, no background—is classic Yazz.

Yazz’ elderly subject is depicted in profile.  He carries a tall cane, and wears the traditional clothing of the Diné.  A blue earring hangs from his ear.  Other than this, the man is all orange and brown, with thin black lines defining his details.  The special attention given to the intricacies is what makes this image unique.  Note the fine work in the man’s face and hands, the way his moccasins hang around his ankles, and his visibly aged hands—this is fine work by a skilled painter.  It all feels very specific, which makes us wonder who this elderly man was.  It certainly feels like an affectionate portrait of someone who was important to the artist.

The painting is signed B. Yazz in lower right.  It is framed under a brown mat in a wood frame.

Provenance: this Original Painting of Elderly Diné Man by Beatien Yazz is from the collection of a resident of New Mexico