Original Painting of Fawns and Porcupine by Beatien Yazz [SOLD] 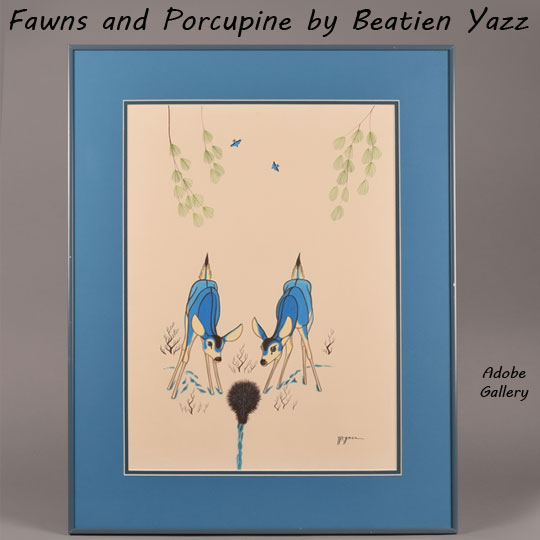 This painting was made by influential Diné artist Beatien Yazz.  It is a sweet and unusual scene that was completed with style and grace.  In this image, two fawns observe as a porcupine travels across the desert.  They look closely but maintain distance, which suggests that they’re experienced enough to know not to make contact.  The scene feels oddly specific, and we’ve seen it depicted in another Yazz painting.  This leads us to believe that this scene is something that Yazz himself observed at some point.

As usual, Yazz’ work is stylish and appealing.  His two fawns are turned directly toward the viewer, which is atypical.  Their necks hang down toward the porcupine, and their perked-up ears and tails make their interest clear.  The porcupine appears as a round ball of quills, from which a short tail emerges.  Up above, two birds circle the sky, and a trio of tree branches hangs down into the frame.  Yazz selected just a few colors for this scene, and used slight variations to create depth.  Note the way that the blue tones become darker and bolder in the sections of the fawns’ bodies that are closer to the viewer, or the extra layer of gray quills painted over the porcupine’s otherwise brown form.  This is fine work from an artist who excelled at creating sweet depictions of wildlife.

The painting is signed B. Yazz in lower right.  It is framed under blue matting in a thin metal frame.

Provenance: this Original Painting of Fawns and Porcupine by Beatien Yazz is from a private Texas collection