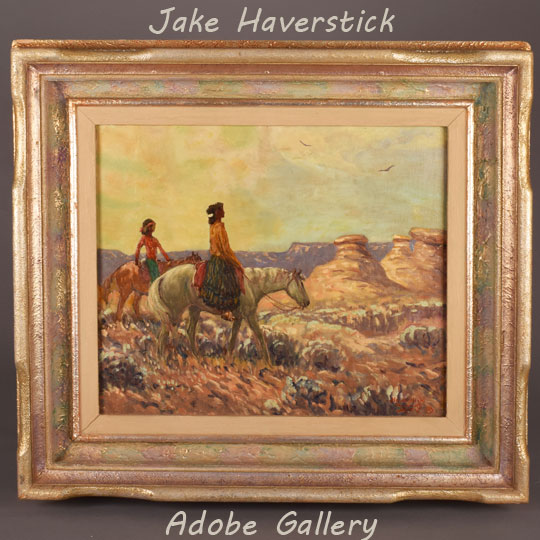 This original oil painting, titled “Mother and Son,” was created by New Mexico painter Jake Haverstick.  It’s a charming, beautiful image, and it’s the first time we’ve seen Haverstick prominently feature human figures.  He handled them with style, putting a unique spin on their appearances while including enough realistic detail to allow the viewer to identify them.  Here, it’s the clothing and hairstyles that jump out as distinctly Diné; Haverstick helpfully confirms this with his handwritten text on the back of the painting.

Haverstick places his subjects on horseback, in the foreground.  They are crossing a particularly plant-rich area of the Navajo Nation.  The mother stares off into the distance, toward steep rock formations.  The boy follows suit, but his upper body remains turned toward his mother.  Haverstick used what must be hundreds of short vertical lines in various colors to create these four figures and their immediate surroundings, giving appealing depth and texture to everyone and everything in the foreground.  His colors are strong, and they blend beautifully.  In the background, he transitions to wider horizontal lines and larger blocks of color.  This effectively separates the two areas and creates the feeling of distance between the artist’s primary subjects and the expanse into which they gaze.  “Mother and Son” is a unique and endearing image that was executed with great skill.

The painting is signed J. Haverstick in lower right. The following text is handwritten on verso: Mother and Son, Navajo, N.M, #154.  The painting is framed in an elaborately designed frame, made specifically for the painting by the artist’s wife, Fay.  Fay brilliantly blended green and purple tones into its interior band, matching those used in the painting’s sky.

Jake (Ralph E.) Haverstick (1898 - 1962) was a painter who lived and worked in New Mexico.  While living in Taos, Haverstick met and was mentored by W. Herbert Buck Dunton, a member of the Taos Society of Artists.  He and his wife Fay eventually moved to Albuquerque.  He lived there for the remainder of his life, painting Western images.  Fay made beautiful, handcrafted frames for the works of Jake and other notable Albuquerque painters.  Haverstick passed away in 1962. IN CONTEMPORARY RHYTHM – The Art of Ernest L. Blumenschein [SOLD]
by

The Art of HOWARD TERPNING [SOLD]
by