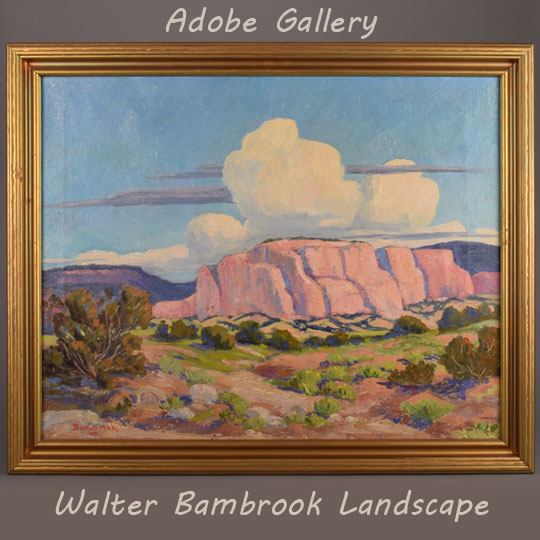 This untitled landscape painting was made by Walter Bambrook, an Albuquerque artist with a long list of noteworthy accomplishments.  Bambrook’s preferred subjects were the natural wonders provided by his home state, and he handled these subjects skillfully.  This piece features a dry patch of desert land, a tall mesa, distant mountains, and a bright blue sky.  The image is divided into halves—earth and sky—by a line formed by the mesa and mountains.  A massive cloud formation billows up from beyond the mesa into the blue sky.

Bambrook’s work with this landscape is strong and appealing.  The painting’s most striking feature is its bright, vibrant color scheme.  The central mesa’s bright pink tones serve as a strong focal point.  Surrounding it are lines of bold blue, bright green, and rich purple. Viewers who are unfamiliar with the Southwest might dismiss these colors as unrealistic, but anyone who’s spent time there will recognize that, on the right day and in the right light, these colors are actually woven into the land.  With this painting, Walter Bambrook managed to capture the magic of the Southwest on canvas.

The painting is signed Bambrook and dated 43 in lower left.  It is framed in a tasteful gold frame.

Walter Bambrook (1910-1984) was a painter who lived and worked in Albuquerque, New Mexico. He attended Albuquerque High School and began his art education at the University of New Mexico (UNM) under the instruction of Ralph Douglas. While at UNM, Bambrook served as a printer's apprentice for the Albuquerque Journal newspaper and began his four-year art training under Carl Von Hassler. After his formal art education was completed, Bambrook taught many private classes and groups at UNM, the Woman's Club and Heights Community Club.

Bambrook received his first award at the age of thirteen from a national art show at the Chicago Art Institute. During his lifetime, he received many awards from other prestigious institutions, among them the L.O.M. Sweat Memorial Museum in Portland, Maine; the Colorado Springs Museum of Fine Arts; the Corcoran Gallery in Washington, D.C.; the Santa Fe State Museum; the UNM Galleries, and the New Mexico State Fair. His paintings are also found in private collections in England, Italy, Australia, the United States, and Indonesia. Bambrook continued to contribute to the New Mexico art community as the Director of New Mexico State Fair Exhibits, as a member of the New Mexico Artists' Equity, the Professional Albuquerque Artists' Guild, the Taos Art Association, and the New Mexico Art League.  Bambrook died on June 1, 1984 in Albuquerque, New Mexico.

Provenance: this Untitled New Mexico Landscape with Cloud Formations by Walter Bambrook is from a  private New Mexico collection