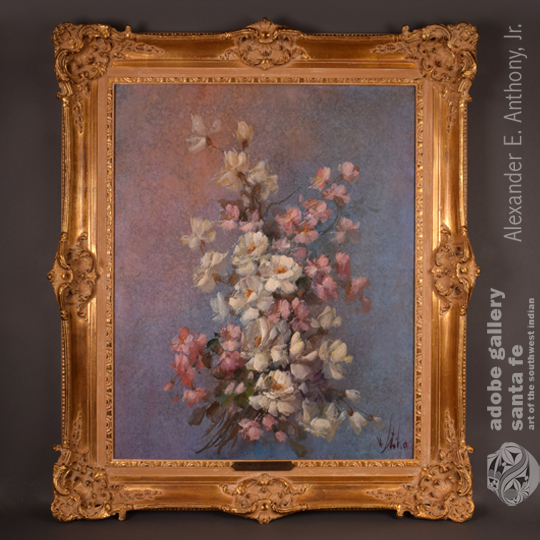 Vladan Stiha (1908-1992) was an impressionist painter who was born in Yugoslavia.  He attempted to flee to the United States during World War II, but was denied entry. He moved to Argentina and, then, Brazil, spending a total of twenty years in South America.  It was during this time that he came into his own as a painter and developed the colorful impressionistic style for which he would ultimately become very famous. Stiha’s studio was located across the street from the American Embassy in Brazil.  He already had a celebrated reputation as an artist and was recognized by personnel at the American Consulate, who offered him American citizenship. He was 62 years of age at the time. Vladan, and his wife Elena, moved to the West Coast, but ultimately settled in Santa Fe.

The Stihas traveled extensively after moving to Santa Fe, visiting Indian reservations and absorbing the region’s rich culture.  He then transferred his visual experiences to canvas, and became very well-known for his beautiful impressionist works depicting Southwestern people and landscapes.  In 1971, Vladan and Elena opened the Stiha Gallery in the historic La Fonda Hotel. Elena, who had been with Vladan since before he fled Yugoslavia, passed away in 2010 at the age of 105.  The Stihas were—and still are—highly regarded by Santa Fe’s art patrons and gallerists.

This large oil painting by Vladan Stiha features a gorgeous floral arrangement over a colorful background.  Pink and white petals occupy much of the image, while the green and brown stems to which they are attached provide contrasting earthy tones.  Stiha’s flowers, made of wide but precise brush strokes, are excellent. In the foreground, they’re large, carefully textured and intricately shaded, mostly opaque.  In the background and off to the sides—further from the viewer, essentially—they become thin, wispy, and translucent, allowing the background to show through. The background itself is fantastic. The right side is mostly but not entirely blue, and the left side is mostly but not entirely pink. These colors are combined in varying intensities throughout the background.  The bluest corner still shows traces of pink, and the pinkest corner is spotted with touches of blue. It feels as if the flowers are placed at the intersection of two clouds, which happen to be made of very different but most certainly complementary colors. The result is dreamy and beautiful, adding an otherworldly quality to an otherwise realistic scene. With its unique, expressive take on classic subject matter, this exceptional piece by Vladan Stiha will appeal to a wide variety of collectors. The painting is signed “V. Stiha” in lower right.  It is framed within an elaborate, ornate gold frame.  Affixed to the frame is a title tag: “Nature’s Masterpiece by Vladan Stiha”.

Provenance: inherited from a collector who purchased it from the Jones Gallery in 1970.

Recommended Reading: Artists of 20th-Century New Mexico—The Museum of Fine Arts Collection.  (One copy of this book is available at this time at Adobe Gallery)