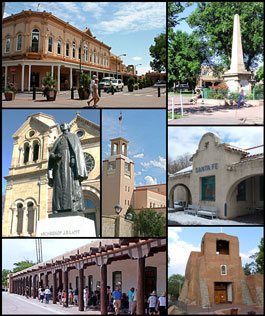 Santa Fe is the capital of the U.S. state of New Mexico. It is the fourth-largest city in the state and is the seat of Santa Fe County. Santa Fe (meaning "holy faith" in Spanish) had a population of 67,947 in the 2010 census. It is the principal city of a Metropolitan Statistical Area which encompasses all of Santa Fe County and is part of the larger Albuquerque-Santa Fe-Las Vegas Combined Statistical Area. The city's full name when founded was La Villa Real de la Santa Fé de San Francisco de Asís (The Royal Town of the Holy Faith of St. Francis of Assisi).

The city of Santa Fe was originally occupied by a number of Pueblo Indian villages with founding dates between 1050 to 1150. One of the earliest known settlements in what today is downtown Santa Fe came sometime after 900. A Native American group built a cluster of homes that centered around the site of today's Plaza and spread for half a mile to the south and west; the village was called Ogapoge. The Santa Fe River provided water to people living there. The Santa Fe River is a seasonal waterway which was a year round stream until the 1700s. As of 2007, the river was recognized as the most endangered river in the United States, according to the conservation group American Rivers.

Don Juan de Oñate led the first effort to colonize the region in 1598, establishing Santa Fé de Nuevo México as a province ofNew Spain. Under Juan de Oñate and his son, the capital of the province was the settlement of San Juan de los Caballerosnorth of Santa Fe near modern Ohkay Owingeh Pueblo. New Mexico's second Spanish governor, Don Pedro de Peralta, however, founded a new city at the foot of the Sangre de Cristo Mountains in 1610, which he called La Villa Real de la Santa Fé de San Francisco de Asís, the Royal Town of the Holy Faith of Saint Francis of Assisi. In 1610, he made it the capital of the province, which it has almost constantly remained, making it the oldest capital city in what is the modern United States. (Jamestown, Virginia, is of similar vintage (1607) but is no longer a capital.) Santa Fe is at least the third oldest surviving American city founded by European colonists, behind the oldest St. Augustine, Florida (1565). (Although Santa Fe is not one of the oldest continuously occupied cities, as between 1680-1692 it was abandoned due to Indian raids. A few settlements were founded prior to St. Augustine but all failed, including the original Pensacola colony in West Florida, founded by Tristán de Luna y Arellano in 1559, with the area abandoned in 1561 due to hurricanes, famine and warring tribes. Fort Caroline, founded by the French in 1564 in what is today Jacksonville, Florida only lasted a year before being obliterated by the Spanish in 1565.)

Except for the years 1680-1692, when, as a result of the Pueblo Revolt, the native Pueblo people drove the Spaniards out

of the area known as New Mexico, later to be reconquered by Don Diego de Vargas, Santa Fe remained Spain's provincial seat until the outbreak of the Mexican War of Independence in 1810. In 1824 the city's status as the capital of the Mexican territory of Santa Fé de Nuevo México was formalized in the 1824 Constitution.

In 1912, when the town had only 5,000 people, the city's civic leaders designed and enacted a sophisticated city plan that incorporated elements of the City Beautiful movement, the city planning movement, and the German historic preservation movement. It anticipated limited future growth, considered the scarcity of water, and recognized the future prospects of suburban development on the outskirts. The planners foresaw conflicts between preservationists and scientific planners. They set forth the principle that historic streets and structures be preserved and that new development must be harmonious with the city's character.

The mainline of the railroad bypassed Santa Fe, and it lost population. However artists and writers, as well as retirees, were attracted to the cultural richness of the area, the beauty of the landscapes and its dry climate. Local leaders began promoting the city as a tourist attraction. The city sponsored architectural restoration projects and erected new buildings according to traditional techniques and styles, thus creating the "Santa Fe style". Edgar L. Hewett, founder and first director of the School of American Research and the Museum of New Mexico in Santa Fe, was a leading promoter. He began the Santa Fe Fiesta in 1919 and the Southwest Indian Fair in 1922 (now known as the Indian Market). When he tried to attract a summer program for Texas women, many artists rebelled saying the city should not promote artificial tourism at the expense of its artistic culture. The writers and artists formed the Old Santa Fe Association and defeated the plan.

During World War II Santa Fe was the location of a Japanese American internment camp. Beginning in June of 1942, the Department of Justice held 826 Japanese-American men in a Civilian Conservation Corps facility which had been acquired for the purpose. By September, the internees had been transferred to other facilities and the camp was used to hold German and Italian nationals. In February of 1943 civilian detainees were transferred back to D.O.J. custody and the camp was expanded to hold 2,100 men. In 1945 four internees were seriously injured when violence broke out between the internees and guards in an event known as the Santa Fe Riot. Following the end of the war, the facility was closed and sold as surplus in 1946. The camp was located in what is now the Casa Solana neighborhood.

The Spanish laid out the city according to the "Laws of the Indies", town planning rules and ordinances which had been established in 1573 by King Philip II. The fundamental principle was that the town be laid out around a central plaza. On its north side was the Palace of the Governors, while on the east was the church that later became the Cathedral Basilica of Saint Francis of Assisi.

An important style implemented in planning the city was the radiating grid of streets centering from the central Plaza. Many were narrow and included small alley-ways, but each gradually merged into the more casual byways of the agricultural perimeter areas. As the city grew throughout the 19th century, the building styles evolved too, so that by statehood in 1912, the eclectic nature of the buildings caused it to look like "Anywhere USA". The city government realized that the economic decline, which had started more than twenty years before with the railway moving west and the federal government closing down Fort Marcy, might be reversed by the promotion of tourism.

To achieve that goal, the city created the idea of imposing a unified building style - the Spanish Pueblo Revival look, which was based on work done restoring the Palace of the Governors. The sources for this style came from the many defining features of local architecture: vigas (rough, exposed beams that extrude through supporting walls, and are thus visible outside as well as inside the building) and canales (rain spouts cut into short parapet walls around flat roofs), features borrowed from many old adobe homes and churches built many years before and found in the Pueblos, along with the earth-toned look (reproduced in stucco) of the old adobe exteriors.

After 1912 this style became official: all buildings were to be built using these elements. By 1930 there was a broadening to include the "Territorial", a style of the pre-statehood period which included the addition of portales (large, covered porches) and white-painted window and door pediments (and also sometimes terra cotta tiles on sloped roofs, but with flat roofs still dominating). The city had become "different". However, "in the rush to pueblofy" Santa Fe, the city lost a great deal of its architectural history and eclecticism. Among the architects most closely associated with this "new" style are T. Charles Gaastra and John Gaw Meem.

By an ordinance passed in 1957, new and rebuilt buildings, especially those in designated historic districts, must exhibit a Spanish Territorial or Pueblo style of architecture, with flat roofs and other features suggestive of the area's traditional adobe construction. However, many contemporary houses in the city are built from lumber, concrete blocks, and other common building materials, but with stucco surfaces reflecting the historic style.

The city is well known as a center for arts that reflect the multicultural character of the city; and has been designated as a UNESCO Creative City.

Each Wednesday the alternative weekly newspaper, The Santa Fe Reporter, publishes information on the arts and culture of Santa Fe; and each Friday, the daily Santa Fe New Mexican publishes Pasatiempo, its long-running calendar and commentary on arts and events.

The city and the surrounding areas have a high concentration of artists. They have come over the decades to capture on canvas and in other media the natural beauty of the landscape, the flora and the fauna. One of the most well-known New Mexico-based artists wasGeorgia O'Keeffe, who lived for a time in Santa Fe, but primarily in Abiquiu, a small village about 50 miles (80 km) away. The New Mexico Museum of Art and Georgia O'Keeffe Museum own several of her works. O'Keeffe's friend, western nature photographer Eliot Porter, died in Santa Fe. Canyon Road, east of the Plaza, has the highest concentration of art galleries in the city, and is a major destination for international collectors, tourists and locals. The Canyon Road galleries showcase a wide array of contemporary, Southwestern, indigenous American, and experimental art, in addition to Russian, Taos Masters, and Native American pieces.

There are many outdoor sculptures, including many statues of Francis of Assisi, and several other holy figures, such as Kateri

Tekakwitha. Given that Francis of Assisi was known for his love of animals it is not surprising that there are great numbers of representations of crows, bulls, elephants, livestock and other beasts, all over town. The styles run the whole spectrum from Baroque toPost-modern. Notable sculptors connected with Santa Fe include John Connell, Luis Jiménez, Rebecca Tobey and Allan Houser.

The Santa Fe Opera's productions take place between late June and late August each year. The city also hosts the Santa Fe Chamber Music Festival which is held at about the same time, mostly in the St. Francis Auditorium and in the Lensic Theater. Also in July and August, the Santa Fe Desert Chorale holds its summer festival. Santa Fe has its own professional ballet company, Aspen Santa Fe Ballet, which performs in both cities and tours nationally and internationally. Santa Fe is also home to internationally acclaimed Flamenco dancer's Maria Benitez Institute for Spanish Arts which offers programs and performance in Flamenco, Spanish Guitar and similar arts for children and adults year round. Other notable local figures include the National Dance Institute of New Mexico and German New Age musician Deuter.

Santa Fe has many world-class museums. Many are located around the historic downtown Plaza or close by: New Mexico Museum of Art - collections of Southwestern Arts. Institute of American Indian Arts Museum - Native American arts with political aspects. Georgia O'Keeffe Museum - devoted to the work of O'Keeffe and others whom she influenced. New Mexico History Museum - located behind the historic Palace of the Governors, showcasing the history of New Mexico Site Santa Fe - A contemporary art space, located at 1606 Paseo De Peralta. Known as the forefront for contemporary art presentation in the Southwest. Santa Fe Children's Museum - family-oriented children's exhibits. Others are located on Museum Hill are Museum of International Folk Art - showcasing folk arts from around the world. Museum of Indian Arts and Culture - exhibits Native American arts. Wheelwright Museum of the American Indian - Native American art and history. Museum of Spanish Colonial Art - Tradition arts from the Spanish-colonial era to contemporary times.