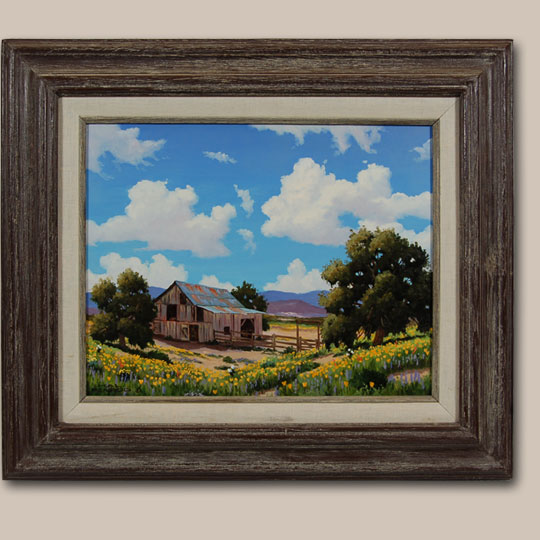 The California poppies (Eschscholzia californica) anchor the foreground of this Hal Penrod painting and lead the eye to the wooden barn with a tin roof.  Beautiful dark green trees frame the barn on three sides and lead one to the mountain in the background.  White billowing clouds float overhead on a beautiful blue sky.

As early as high school Hal Penrod won awards for his drawings. Later in life he drove trucks all over the western US and that is when he began using oils to paint and focus on putting the various landscapes of the west on canvas. His favorite subject was the deserts of the southwest including Indians and the old west lifestyle. He was especially noted for the skies featured in his paintings.

This Original Painting "Colors of Spring" by Hal Penrod came from an estate from Taos, New Mexico, but there is no evidence that the artist was ever a resident of Taos or visited Taos during his career. This farm house setting among California poppies would indicate that perhaps this was painted while the artist lived in California.

Provenance: from the estate of John and Dixie Yaple, owners of a gallery in the Hotel La Fonda de Taos from 1945-1949, and then director and curator, respectively, of The Millicent Rogers Museum from 1950 to 1977.