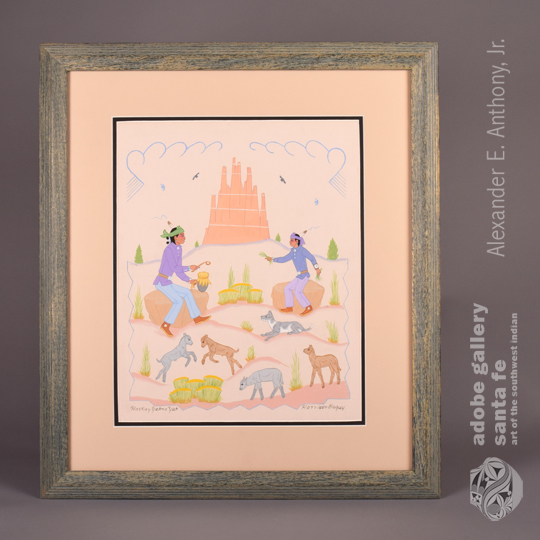 Harrison Begay wrote the title of this painting on the back as “Boys Learn the Dance Songs” and added “new songs, old song will keep these youngsters happy while taking care of their sheep and other animals.”

In the center back is a landmark outcropping that is seen all over the Navajo Reservation. The youngsters each found a rock on which to sit while one plays a pottery drum and the other one apparently sings.  Diné traditionally take a pottery jar, spread a skin over it, and use it as a drum. Begay placed contour lines on the ground to provide depth of vision and filled the lower portion of the painting with a variety of animals, for which the youngsters are caring.

Diné painter Harrison Begay (1914-2012) Haashké yah Níyá - The Wandering Boy was one of the most well-known students of the Santa Fe Indian School, where he was educated from 1934 to 1940.  He received a great deal of international acclaim during his long career, and was one of the first Native American artists to support himself financially with his artwork. Begay enjoyed a long career as a prolific creator of “flat-style” watercolor paintings, celebrating beauty and serenity with a warm and inviting color palette.

Begay always painted with soft pastel colors, never anything bright or garrish. Dorothy Dunn stated that he never painted from models but always from memory.

“Begay evolved a style that is essentially his own, a style which influenced others, but which has not been equaled in perfection by any of those he has so greatly affected.  Lines that breathe rhythm; clean, cool, and sensitive coloring; a gentleness of figure; peace and calm throughout, from facial expression to composition; impeccable drawing, the best in Navajo art; simplicity coupled with realistic detail; few and conventional plant forms or other background effects; harmony and serenity—these and other more elusive traits and qualities are combined in the inimitable Begay manner.” Tanner 1973

Condition: this Original Painting "Diné Boys Learn the Dance Songs" appears to be in original condition

Provenance:  from the collection of a family from Massachusetts 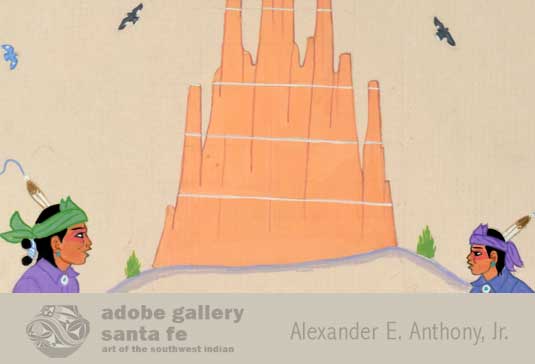