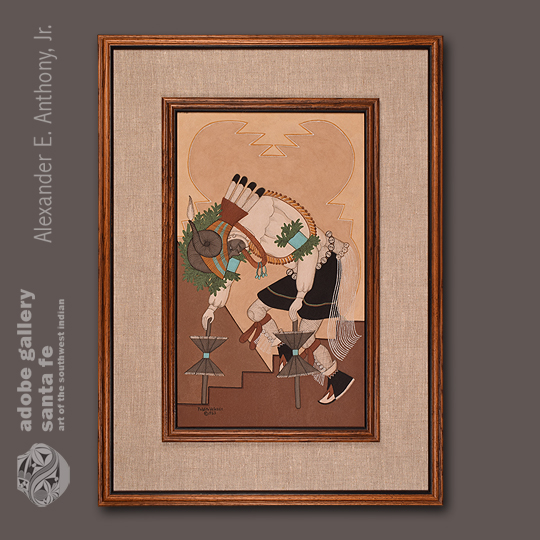 This excellent mineral earth painting by Pablita Velarde features what we would usually refer to as a Ram Dancer. Interestingly, Velarde’s text written on the back of the painting reads “Mountain Sheep (Big Horn) Dancer.” Pueblo dancers were Velarde’s favorite subjects, and she painted many during her long and productive career. Though it is composed in the style that is typical of her single figure pueblo dancer images, this piece is particularly impressive.  It’s a large piece, and the dancer occupies the majority of its available space. He’s pictured mid-dance, as is expected, but his posture is unusual. He’s bent over much further than is to be expected, with his face turned back towards his knees.  The simple geometric patterns that fill the background, completed using earthy colors, are particularly pleasing.

The large painting is presented in a beautiful carved wood frame, which is mounted on a fabric backing within a larger, matching frame.  The painting is signed “Pablita Velarde” and dated 1983. By this point in her career, Velarde had mastered this type of composition, and that wealth of experience is apparent in this exemplary work. This is a classic image, expanded into a larger-than-usual presentation, executed with all the style and grace that collectors expect of Golden Dawn.

Pablita Velarde (1918-2006) Tse Tsan - Golden Dawn was an innovative and influential artist from Santa Clara Pueblo.  Velarde was a full-time student in Dorothy Dunn's art class at the Santa Fe Indian School, where she studied alongside Tonita Peña.  These two women are regarded as the first Native American women to support themselves as painters, but it’s not just because of this that they are remembered so fondly.  It’s because of the quality of their works that they have remained so visible in the many years since they have passed.

Velarde painted in the traditional style of the Santa Fe Indian School, creating accurate portraits of Native American life and culture. At first she worked in watercolor, but later learned how to prepare paints from natural pigments—a process called “Fresco Secco.”  She is best known for these mineral earth paintings. She ground mineral and rock elements using a metate and mano until the result was a powdery substance. From this substance her paints were made. She also painted on paper, often using casein in addition to earth pigments. She was also known to create art derived from the Navajo sandpainting tradition.

Velarde’s list of accomplishments and accolades is long and varied.  Her works have been exhibited around the country and are included in many prestigious public and private collections. Author and anthropologist Clara Lee Tanner called her the “greatest woman artist in the Southwest.” Her daughter Helen Hardin and her granddaughter Margaret Bagshaw were themselves very successful and influential painters, creating an artistic dynasty that spanned three generations.

Condition: very good condition, with a few small paint aberrations on the edge where framed

Provenance: this Santa Clara Pueblo Painting of Mountain Sheep (Big Horn) Dancer by Pablita Velarde is from the collection of a family from Albuquerque