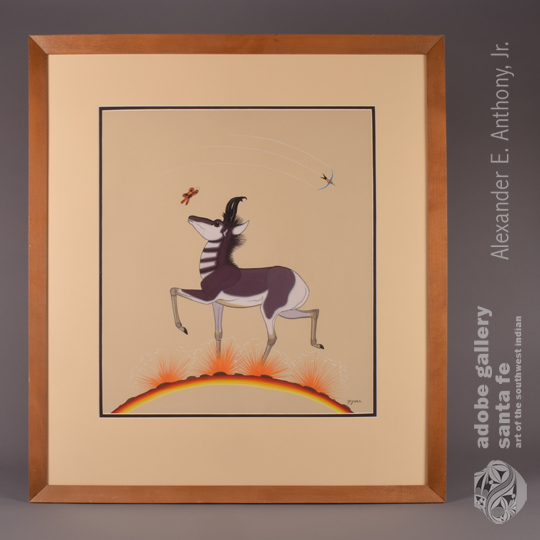 This untitled watercolor painting by Navajo artist Beatien Yazz provides a fine example of his many strengths as a creator of traditionally-minded Diné imagery.  Here, Yazz chose an antelope, which he placed atop a gently sloping hill. His antelope, made of a lovely shade of purple, directs its wide expressive eyes towards an orange and red butterfly.  The position of its legs suggests that it’s in motion, trailing behind the colorful insect. In the distance, a blue and orange bird crosses the sky, leaving three white lines across the sky in its wake. The hill, rising up from beneath the painting’s matting in a soft semicircle, is made of a series of warm colors, beginning with a pale yellow in its interior and ending with a bright, bold red.  Atop the red line are rocks and four orange plants with white flowered tips. Yazz’s color choices here are powerful, and their limited use makes them all the more effective. The vast majority of this elegantly sparse image is unpainted, which was a wise choice by the artist. It’s classic Diné with a unique twist—one of the most graceful and striking Yazz compositions that we’ve had the pleasure of handling.

Beatien Yazz (1928-2012) Little No Shirt - Jimmy Toddy was an influential Diné painter.  Born in 1928 on the Navajo Reservation, Yazz showed promise as an artist very early. When he was young, Yazz met the Lippencotts, traders at the Wide Ruins Trading Post. They made available to him scraps of paper and other equipment so that he might practice in color.  He served in the U.S. Marines in World War II and was a member of the famed Navajo Code Talkers. Following the war, he returned to the reservation and began to paint in earnest. He specialized in subjects familiar to him in his daily life on the reservation. He has been eminently popular with collectors since the 1950s.

Yazz is only one of his names. There is his Navajo name, which is unknown. He has signed his paintings with many variations: Beatien Yazz, Beatian Yazz, Beatian Yazzia, Beatin Yazz, and B. Yazz. Finally, there is a name that most people use, Jimmy Toddy.  Yazz was the subject of Alberta Hannum's books Spin a Silver Dollar and Paint the Wind, both of which prominently featured his artwork.  During the last 20 years of his life, he suffered from severe eye problems, which medical doctors were unable to cure. A Navajo Medicine Man said that his problems were the result of having painted the Navajo sacred Yeibichai and that to be cured, Yazz would need to undergo a purifying ceremony. He was unable to afford the expensive ceremony.  Yazz passed away in 2012, leaving behind a significant body of work.

Condition: this Original Painting of Antelope on a Hill by Navajo Painter Beatien Yazz is in excellent condition