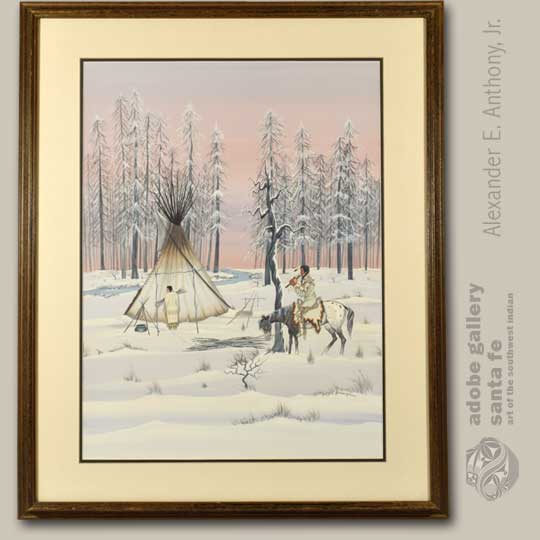 Doc Tate Nevaquaya (1932 - 1996) was a Comanche painter and musician.  He was given the name Joyce Lee Tate Nevaquaya when he was born in 1932 at Apache, Oklahoma.  He had been delivered by a physician named Dr. Joyce, and the family honored the doctor by using Joyce for their son’s first name.  He was nicknamed Doc, most likely because of his relationship to the physician. He was always known as Doc Tate. He was orphaned at age 13 and went to live with his grandparents, thus strengthening his relationship with his Comanche heritage.

Doc Tate was a man of many talents.  He was a teacher, minister, lecturer, historian, dancer, composer, singer, flautist, and painter.  His interest in the courting flute—a traditional instrument that is played by many American Indian tribes during courtship and fertility rituals—began in childhood and eventually became his primary creative interest.  Tate became an accomplished flautist, instructor, and lecturer and was one of the leaders in a 1970s revival of the courting flute. Later in life, he would release two recordings of his courting flute compositions. He also taught his three sons to make and play flutes.

This untitled watercolor painting features Doc Tate’s favorite subject matter: a courting flute performance.  Tate’s flautist is seen in profile, on horseback, playing his instrument. He’s dressed beautifully and elaborately.  His audience—a Comanche woman, seen from behind—turns her head to the side, suggesting to the viewer that the music has caught her attention. It’s a winter scene, and Tate handled this potential challenge with admirable skill. White dominates the image, as it should with a winter scene, but Tate adds waves of gray to give the landscape variety and depth.  Rising up from the sea of white are dozens of trees, bereft of leaves but covered in snow. Above the horizon, a pink and purple sky implies to the viewer that the sun has just set. This sweet, romantic scene was clearly inspired by affection and informed by experience.

This is a large piece—about 35 inches by 29 inches including its frame. The painting is signed Doc Tate Nevaquaya and framed in a simple wood frame.

Condition: this Original Painting of Flute Player in Winter is in excellent condition 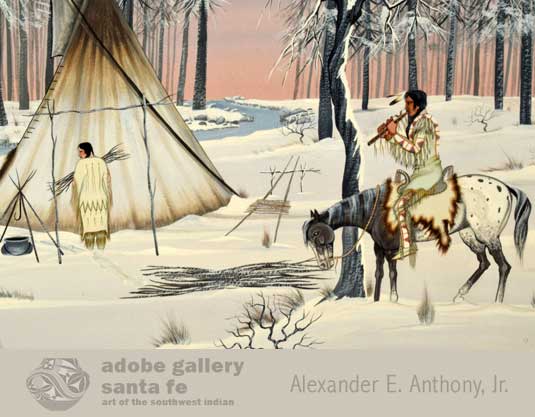