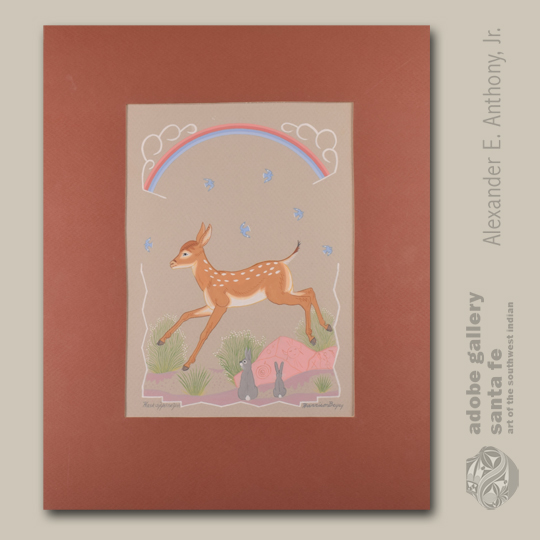 Harrison Begay (1914-2012) Haashké yah Níyá - The Wandering Boy was a successful and widely influential Diné painter and printmaker.  Begay was one of the most well-known students of the Santa Fe Indian School, where he was educated from 1934 to 1940. He received a great deal of international acclaim during his long career, and was one of the first Native American artists to support himself financially with his artwork.  Begay enjoyed a long career as a prolific creator of “flat-style” watercolor paintings, celebrating beauty and serenity with a warm and inviting color palette. Begay always painted with soft pastel colors—never anything bright or garish—and chose scenes of Navajo daily life and religious rituals as his subjects.

“Extreme delicacy becomes uppermost in this artist’s works with lines so fine that it seems impossible that they could have been made with a brush.  Coupled with this are the keen powers of observation of which the Indian has more than his share. In Begay’s work there is often the disciplined balance between the heavy formalities of inherited tradition and a warm realism which developed within a very short span of years. . . Begay evolved a style that is essentially his own, a style which influenced others, but which has not been equaled in perfection by any of those he has so greatly affected.  Lines that breathe rhythm; clean, cool, and sensitive coloring; a gentleness of figure; peace and calm throughout, from facial expression to composition; impeccable drawing, the best in Navajo art; simplicity coupled with realistic detail; few and conventional plant forms or other background effects; harmony and serenity-—these and other more elusive traits and qualities are combined in the inimitable Begay manner.” Tanner 1973

This untitled watercolor painting features one of Begay’s favorite subjects: wildlife on the Navajo reservation.  In the center of the image, a fawn leaps over a pink rock formation. The fawn exemplifies what Begay is known for: gentle, sensitive, accessible imagery completed in the traditional “flat style” of the Santa Fe Indian School. Two rabbits, backs turned towards the viewer, spectate calmly.  One of their heads is turned to the left, allowing the viewer a glimpse of his face. Above the fawn, a half-dozen birds circle the air. Above the birds are white clouds and a colorful rainbow. A white line zigzags softly along the sides and bottom The image is completed in Begay’s typically soft, warm color palette.  The excellent linework and carefully depicted details that collectors expect of Begay are this painting’s most appealing characteristics.

Condition: this Original Painting of Leaping Fawn is in excellent condition

Provenance: from the large Native American Paintings collection of a New York resident 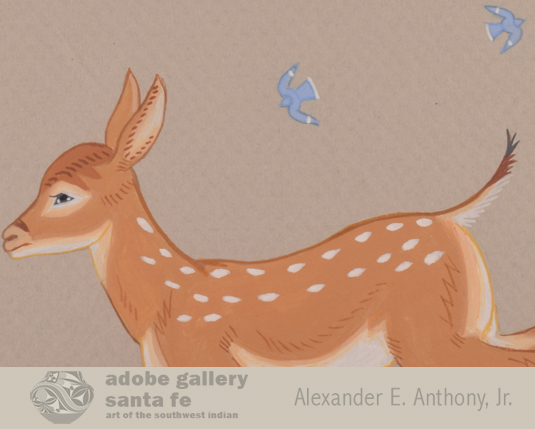