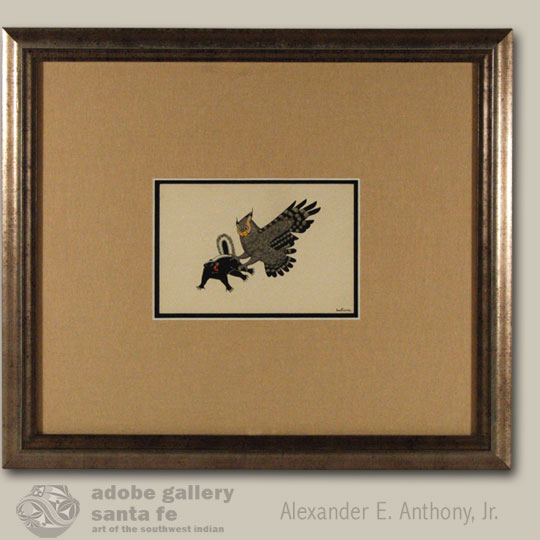 Alfonso Roybal (1898-1955) Awa Tsireh was many things to his pueblo of San Ildefonso: he was a farmer, pottery painter, museum employee, painter and silversmith.  He had many trades and skills, but is primarily remembered today as a painter and metalworker. He began painting in 1917, which makes him among the very first pueblo painters. His artworks are currently featured in “Awa Tsireh: Pueblo Painter and Metalsmith,” a comprehensive exhibition at Phoenix's Heard Museum. His works are included in many major public and private collections, including that of the Smithsonian Institution’s National Museum of the American Indian.

Awa Tsireh, one of the first pueblo painters, was recognized beyond his native world as an outstanding artist. His watercolors were sent by Alice Corbin Henderson to the Arts Club of Chicago for a special exhibit in 1920. His paintings appeared in early exhibits in Santa Fe, and he was among the several artists to receive prizes at the first Santa Fe Indian Market. In 1925, the Chicago papers were generous in their acclaim for his exhibit in the Newberry Library. The Exposition of Indian Tribal Arts in New York in 1931 included Awa Tsireh paintings. He is generally regarded as one of the best pueblo painters, and his works continue to increase in value as his historical significance becomes more widely recognized.

This piece illustrates exactly why Awa Tsireh is so highly regarded by Native American art scholars, collectors and dealers.  The artist’s subjects—an owl and a skunk—were crafted with truly astounding skill. The owl, pictured in flight with his legs and talons extended toward the skunk, is made of remarkably fine lines and a beautiful gray color.  His eyes are electrified, full of energy, focused on his potential prey. The skunk is equally well crafted, with his mouth agape and his hind legs flailing behind him as he leaps out of his attacker’s path. The whole scene, which would feel aggressive in the hands of a lesser artist, is as charming and beautiful as it is exciting.  At about 4 inches by 6 inches, it’s a small piece; and its compact size works in its favor.

This painting will be recognizable to anyone who ever had the pleasure of visiting the home of dealer and collector Marti Struever.  It was part of her personal collection, displayed for many years but never offered for sale. According to those who handle her estate, many dealers attempted to purchase it over the years, but Marti always declined to sell.  After her passing, her employees brought it to Adobe Gallery in hopes of finding an appreciative owner. The painting is signed in its lower right corner, and framed beautifully underneath museum protective glass.Condition: this Original Painting of Owl and Skunk from Marti Struever's Collection is in original conditionProvenance: from the personal collection of Santa Fe dealer Martha Hopkins Struever