Arapaho painter and ledger artist Carl Sweezy crafted a warm, peaceful image with “WAARRIORS.”  His warriors are at rest, or perhaps planning their next move, as they appear to be staring in the same direction.  Two of the horses face in the same direction, and the third, located in the center, faces away from the viewer. The horses, with their doe eyes and kind faces, are delightful. They’re made of simple, fluid curving lines which are filled in with soft, translucent watercolor paints. Sweezy’s animals, which usually bear the influence of Plains hide and ledger art, are as compelling as ever here.

Sweezy’s warriors (or “WAARRIORS,” according to the charmingly misspelled title) are beautiful creations.  Like the horses, their outlines are simple and understated. They carry bows and quivers full of arrows, and sit on bright blue saddle blankets. Bright colors are used carefully and effectively, highlighting the warriors’ warbonnets and beaded moccasins. The center warrior’s buckskin shirt and leggings are a brilliant yellow that is not often seen in paintings from this period.  As mentioned above, they stare off into the distance together, with their faces appearing calm and focused.

The painting is signed Carl Sweezy and titled “WAARRIORS” in its lower right corner.

Carl Sweezy (1879-1953) Wattan was a talented and influential Arapaho painter and ledger artist. Sweezy was born in 1879 on old Cheyenne-Arapaho Reservation in Oklahoma. His father was Hinan Ba Seth (Big Man) and his mother, unfortunately, died when he was very young. Sweezy attended Mennonite Mission Schools in Oklahoma and Kansas. He also attended Chilocco and Carlisle Indian Schools. Sweezy’s Indian name was Wattan, or “Black.” He was also known as “Waatina.”   Sweezy’s style was informed by Plains ledger art, which was flourishing during his early life. He occasionally created ledger art and painted portraits, but he is best known today for his excellent watercolor paintings.  Sweezy’s long list of notable exhibitions includes the American Indian Exposition, Philbrook Arts Center, and the Intertribal Indian Ceremonials in Gallup. His works are included in the collections of the Smithsonian Institution, Chicago Natural History Museum, Gilcrease Institute, Museum of the American Indian, and University of Oklahoma.  Sweezy passed away on May 28, 1953 in Lawton, Oklahoma. 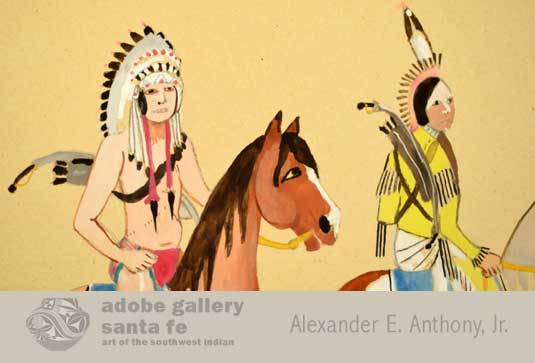