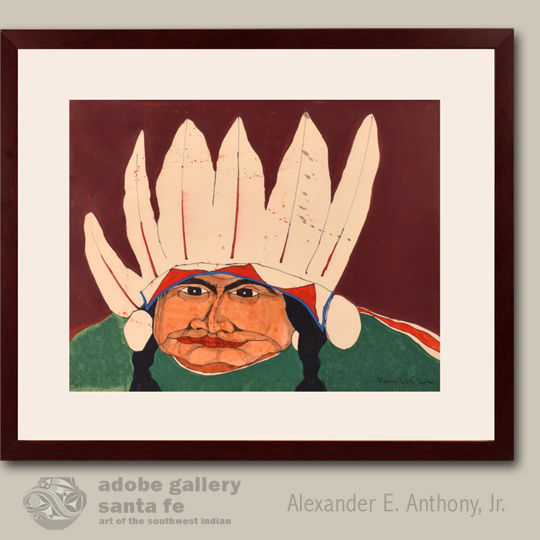 Internationally known contemporary Native American artist Kevin Red Star (1943- ) was born in Lodge Grass, Montana, in 1943. He began showing publicly in 1965 and has an impressive array of one-man shows and group exhibits to his credit.  Red Star's compelling interpretations of Native Americans, through the use of color and massive forms, characterize this gifted artist's style. These artistic elements are purposeful. Their intent is to convey the role of the ritual personified by the subject—an oversized hand emphasizes strength and skill.  Although he draws from the rich sources of the Crow Indian culture, whose principal means of expression for generations has been oral and pictorial, he clearly transcends the traditional portrayals of American Indian themes and infuses his subjects with the contemporary objectivity of a trained and disciplined artist working on a progressive plane.

On his web site, Red Star provides a description of his creative goals and desires: “Indian culture has in the past been ignored to a great extent. It is for me, as well as for many other Indian artists, a rich source of creative expression. An intertwining of my Indian culture with contemporary art expression has given me a greater insight concerning my art. I hope to accomplish something for the American Indian and at the same time achieve personal satisfaction in a creative statement through my art.”

This untitled watercolor portrait uses strong colors to its advantage.  A deep, dark maroon background frames six feathers, which rise from the headdress of a Native American man.  Primary colors, along with the off-white of the paper itself, create his clothing and headdress. Small spots in various colors are scattered around the image, loosely but deliberately.  Red Star’s subject looks focused and serious, with a wrinkled, expressive face and lively black eyes. He looks wise beyond his years and, interestingly, wide beyond his actual size. He’s stretched out, horizontally, exaggerated physically in an appealing fashion.  This delightful image is signed in its lower right corner, though one does not need a signature to know that this is the work of Kevin Red Star.

The painting was framed recently in a maroon frame which matches the painting’s background.  It is mounted on a white backing with its edges exposed.  It is signed Kevin Red Star.

Condition: this Original Watercolor of Indian Man Wearing Headdress is in good condition.  Paint is lightly smeared in a few spots, which may or may not be inherent to the piece

Provenance: from the large collection of a New York Resident