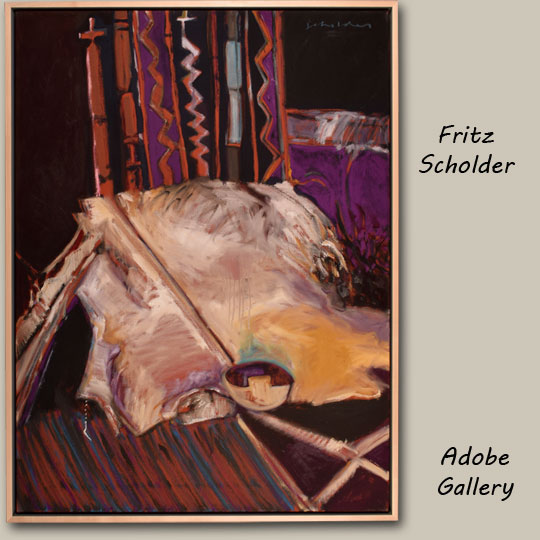 This wonderful original painting was created by influential Luiseño artist Fritz Scholder.  Depicted in this painting is a Hopi Flute Altar, an assemblage that is part of the Hopi Flute Ceremony.  The nine-day ceremony—a prayer for rainfall and healthy corn crops, essentially—occurs every other summer, alternating with the Hopi Snake Dance.  The altar depicted here resides in the ancestral rooms of the Flute Clan.

The Flute Altar’s components—a flat wooden arch, armless effigies, carved sticks representing lightning and rain clouds, cornmeal and sand, and a medicine bowl—are depicted here in a fairly straightforward fashion.  Subtle touches of dreamy abstraction appear, however, blending the elements into one another and amplifying the depth of the image.   Scholder’s rich reds, blues and purples work perfectly with the darker background.  The lighter tones used for the arch, sand and cornmeal balance out the darker tones used elsewhere.  The painting dates to the mid-1970s, a period considered by many to be the height of Scholder’s career.  This is a rare and beautiful image from one of the most significant voices in the world of Native American art.

The painting is signed Scholder in the upper right.  It was recently professionally reframed.

Fritz Scholder (1937-2005) was by birth one-quarter Luiseño Indian, a California Mission Tribe. He was born in Minnesota, spent two decades in the Dakotas, and lived in Galisteo, NM and Scottsdale, AZ. Scholder came to Santa Fe in 1964 to teach advanced painting and art history at the new Institute of American Indian Arts, a school established by the United States Department of the Interior. He obtained a Master of Fine Arts degree at the University of Arizona in 1964 before moving to Santa Fe and joining IAIA.  Scholder enjoyed a long and successful career and is regarded today as one of the most innovative and influential Native artists.

Provenance: this Original Painting of a Hopi Flute Altar by Fritz Scholder is from the large collection of a Santa Fe resident