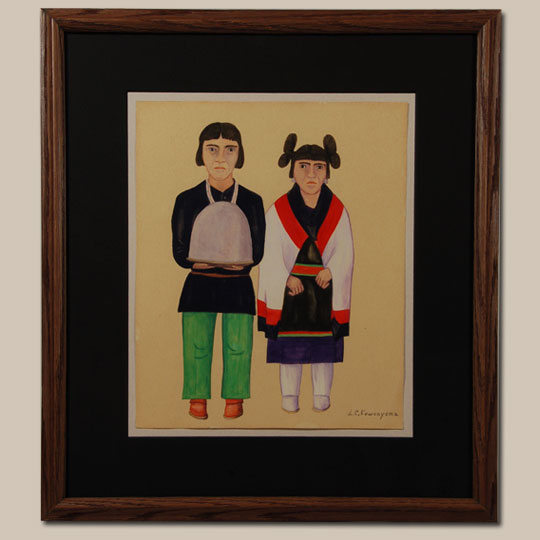 This colorful early Hopi Pueblo painting was created by Leroy C. Kewanyama.  The stiffness of his subjects suggests that this is an early-career work, which would date the piece to the 1930s or 1940s.  In these early works, there was little modeling, no ground plane, and the figures would often appear rather flat.  Kewanyama was talented, though, and clearly well on his way to creating more elaborate works.

Kewanyama’s subjects are a Hopi man and woman.  The man holds piki bread.  The woman, dressed in traditional garb, stands beside him.  They face the viewer directly, with stoic expressions on their faces.  The viewer might be reminded of Grant Wood’s “American Gothic”—perhaps this a Hopi tribute to that famous and influential painting.  Whatever its inspiration or intent might have been, this charming painting will make a nice addition to a collection of early Hopi works.

The painting is mounted with its edges exposed on an acid-free white backing, within a black mat, and a simple wood frame.  It is signed L.C. Kewanyama in lower right.

Leroy C. Kewanyama (1922-1997) was born at Shungopavi Village, Second Mesa, on the Hopi Reservation on October 14, 1922. As an adult, he moved to Winslow, Arizona, where he made a career of carving Katsina dolls and painting images of katsina dances. He also made jewelry in the Hopi silver overlay style. He served in the U. S. Navy during World War II.  Works by Kewanyama are in the Museum of the American Indian Heye Foundation in New York; Museum of Northern Arizona in Flagstaff; Museum of New Mexico in Santa Fe; and in the National Park Service, Department of Interior in Washington, DC.  Exhibits of his art have been featured at the Arizona State Museum of the University of Arizona in Tucson; Hastings College Art Center in Hastings, Nebraska; the Museum of the American Indian in New York; the Philbrook Art Center in Tulsa, Oklahoma; and the Peabody Museum at Harvard University in Cambridge, Massachusetts.  These collections and exhibits of his work are testimony to his significance as an early Hopi artist.

Condition: very good condition, with light abrasions and stains around the edges

Provenance: this Original Painting of Hopi Pueblo Man and Woman by Leroy Kewanyama is from a private Santa Fe collection