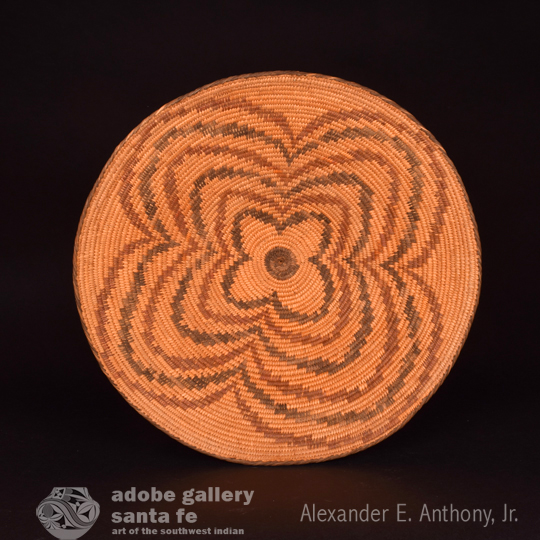 Pima basketry design has always mostly been started with a large black circle in the center from which the design expanded. When the center black circle is minimized, as in this basket, the design is more creative and lighter in structure. The design on this basket has the appearance of exploding outward from the bottom four-petal element as ripples of a wave.

The stitching on this basket is consistently relatively tight, a measure of the talent of the weaver.  It is difficult to place a date on this bowl as it does not exhibit use or significant wear patterns. It was quite likely made in the mid-1930s.

The use of red in a Pima basket is quite rare. Generally, Pima basket makers used only devil's claw for the color in their works. This basket has a significant amount of red. Perhaps the artist was influenced by seeing Apache polychrome baskets and chose to try it on her basket. The result is quite successful leading to an image of perhaps a butterfly or a flower.

Provenance: from the Native American Basket collection of a Colorado family.