Pochoir Print from Pueblo Painting of a Turkey [SOLD] 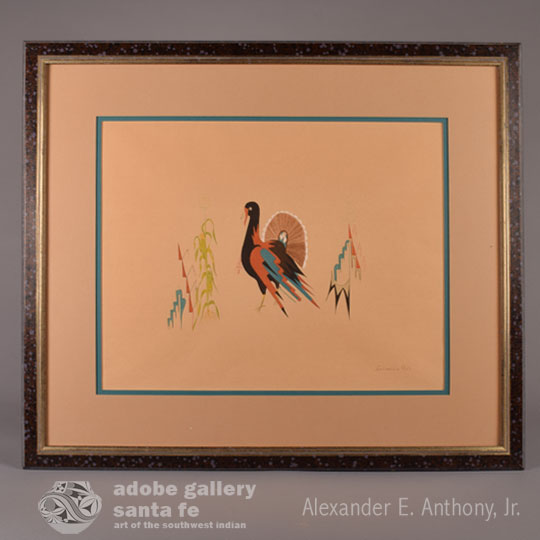 This Pochoir print comes from a portfolio of 50 images published in Nice, France in 1932 from original paintings provided from artists of San Ildefonso and Zia Pueblos.  This is plate #8 of the portfolio. The image is titled “Turkey” and signed Encarnacion Peña.

Between 1929 and 1952, C. Szwedzicki, a publisher in Nice, France, produced six portfolios of North American Indian art. American scholars Oscar Brousse Jacobson, Hartley Burr Alexander and Kenneth Milton Chapman edited the publications. Many of the images were published as Pochoir prints which are similar in appearance to silkscreen prints. These works represent original art by 20th-century American Indian artists.  One of the six portfolios was "Pueblo Indian Painting: 50 Reproductions of Watercolor Paintings by Indian Artists of the New Mexican Pueblos of San Ildefonso and Sia."  That portfolio was published in 1932.

Condition: very good condition. Has not been examined out of the frame.

Provenance: this Pochoir Print from Native American Painting of a Turkey is from a Colorado gentleman