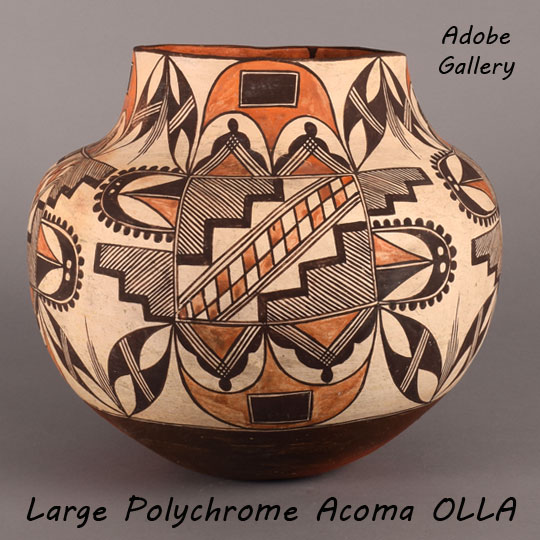 This unsigned historic polychrome OLLA was created by an unknown Acoma Pueblo potter.  It likely dates to the 1920s, and it serves as a fine example of the unique mastery of design that appears in fine historic Acoma wares.  This particular piece uses a single wide design band, which contains four repetitions of an intricate combination of traditional Acoma design motifs.

Each of these four repetitions is based around and within a rectangular form. Diamonds, zigzagging lines, and groups of fine parallel lines appear within the larger rectangular forms.  On the outside, sharp forms are set within gentle round designs, creating a striking pattern that becomes quite elaborate without ever feeling too busy.  Elegant leaf designs hang down from the rim and reach up from the bottom, linking the four larger forms into one fluid, never ending pattern.

The colors used here are black and orange over a white slip, with a red base and interior band.  These colors are typical of Acoma wares, but they appear frequently for good reason—they’re strong and appealing but never garish or excessive.  Like the designs themselves, the colors are bold and eye-catching but also timeless and elegant.  The jar’s form is similarly strong, with an almost globular body giving way to a raised neck.  It is evident that the potter who created this piece was incredibly skilled and appropriately confident in her considerable abilities.  Her subtle experimentation with form and design resulted in a beautiful example of historic Acoma pottery.

A jar with some similarities to this one is pictured on page 418 of Lanmon and Harlow’s The Pottery of Acoma Pueblo.  We notice similar design elements, and more significantly, a similar flow in the way the elements are combined.  That pot is attributed to Acoma potter Marie Cimmeron (“1875/1885-probably before 1937), per Lanmon and Harlow).  Very few specific bits of information are available regarding Cimmeron, but it is reported that she received a first prize for her work at the 1922 Southwest Indian Fair.  At least two of her grandchildren, Rachel (Cerno) Concho and Joseph Cerno Sr., went on to become potters.  Our featured jar may have been made by Cimmeron, but we can’t say with certainty.

Condition: Excellent condition, with one small slip crack extending about half an inch down from the rim.  Blacklight examination reveals no signs of restoration or repair.

Provenance: this Large Polychrome Acoma OLLA with Intricate Designs is from a private collection

Reference: The Pottery of Acoma Pueblo, Lanmon and Harlow