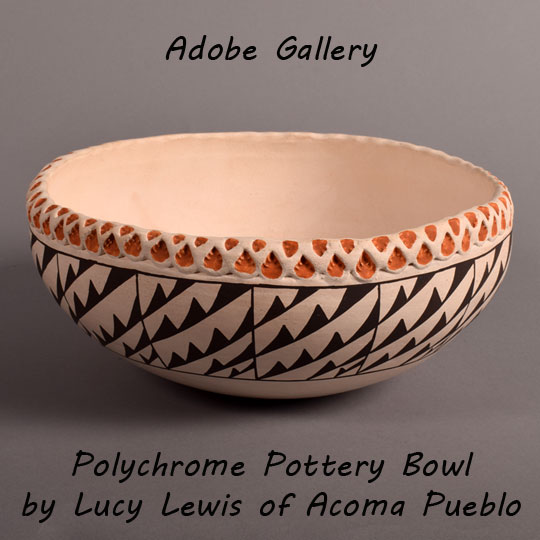 This polychrome pottery bowl was made by Acoma Pueblo matriarch Lucy Lewis.  Its form is classic, and its design is unique.  A wide design band circles the bowl, covering about half of its exterior in the lightning pattern Lewis used somewhat frequently.  Vertical lines pass from the top of the band to the bottom, creating rectangular blocks of lightning.  Above this design, an additional band of clay appears, circling the bowl’s rim.  Triangular indentations circle the band, with pointed edges facing up.  Pairs of tiny ridges appear on each side of each triangle, giving them shapes that recall pine trees.

The bottom of the bowl is signed Lucy M. Lewis, Acoma.

Lucy Lewis (1898-1992) was one of the most widely respected potters from Acoma Pueblo. She was one of the last Acoma matriarchs to live full-time on the mesa top.  She followed pueblo tradition in every step of pottery production—offering prayers of thanks to Mother Earth for the clay, taking only as much clay as she needed, working the clay with only her hands, forming the vessel from coils of clay, scraping the walls with tools fashioned from gourds, painting the vessel with slips and paints made from clay and vegetal sources and, finally, firing the finished pieces in an outdoor handmade kiln.  Lucy signed her pottery as Lucy M. Lewis.  She was born in 1898 and passed away on March 12, 1992.  She spent nearly all her life atop the high mesa of Acoma Pueblo, making pottery since the age of 7. She is largely responsible for the revival of Mimbres black-on-white pottery designs which are more than 1,000 years old. She was famous, as well, for her exquisite polychrome designs and her fine-line and lightning designs.

Provenance: this Polychrome Pottery Bowl by Lucy Lewis of Acoma Pueblo is from a private California collection