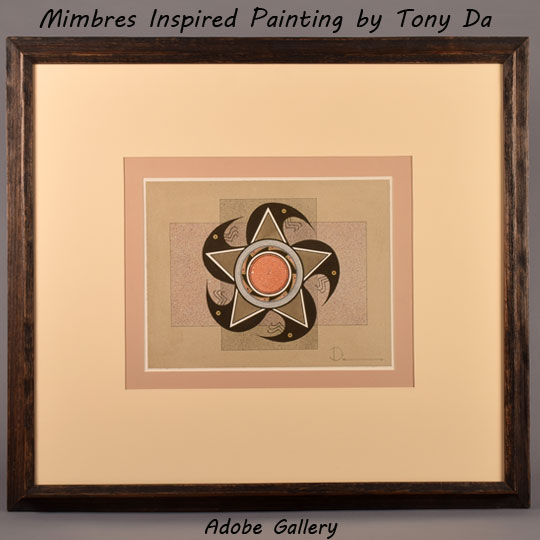 This untitled original watercolor painting was created by San Ildefonso Pueblo artist Tony Da, one of the greatest and most innovative Pueblo artists.  As the grandson of Maria and Julian Martinez and the son of Popovi Da, Tony Da came from a long line of influential artists.  During what turned out to be a relatively short career, Da managed to find his own voice and master multiple different artistic disciplines.  His pottery pieces have become some of the most valuable Native artworks, and his paintings rarely appear on the market.  We are pleased to offer this 1970 painting to Tony Da’s many collectors.

The painting features a beautiful combination of prehistoric Mimbres culture inspired figures and modern designs of the artist’s own creation. Each element is centered around a point in the middle of the image, creating a smooth and appealing rhythm.  The image is perfectly symmetrical, save for the two elements that nod to prehistoric pottery designs.  These elements—a band of triangular designs within the central circle, and the bold black Mimbres figures emerging from the circle’s exterior—appear repeatedly, creating a feeling of motion and momentum.  Triangular forms appear within the Mimbres figures, creating a star design.  Da’s primary palette of grays and blacks feels elegant and refined.  Brighter tones appear as well, most prominently in the central circle, but also in an atomized application within the two rectangular forms in the background.  These brighter tones balance out the dark, muted colors used for the larger figures. This is stylish, timeless work from one of the most influential Pueblo artists.

The painting is signed Da and dated “‘70” in lower right.  It is framed under two layers of matting in tan and cream tones within a carved wood frame.  Included with the painting is a receipt from the Popovi Da Studio of Indian Arts, where it was purchased in 1972 by a collector from Colorado.

Tony Da (1940-2008) Thun-Phoe-She (Sun Dew) was a gifted and influential potter, painter, and jeweler from San Ildefonso Pueblo.  His father was Popovi Da and his grandparents were Maria and Julian Martinez. Tony Da’s works are among the most collectible pieces of Native art, and not just because of his family name.  Tony Da was an innovative genius, whose natural artistic abilities matched—and in some areas exceeded—those of his ancestors.  Tony Da’s career was unfortunately sidelined by a motorcycle accident in 1982, when he was just 42 years old.  After the accident, he was unable to continue making the elaborate and beautiful pottery jars, bowls, and figurines for which he had quickly become so well-recognized, but he was able to continue creating works on paper.  Da passed away in 2008 and has come to be regarded as one of the most significant Native American artists.

Provenance: this Mimbres Inspired Painting by Tony Da of San Ildefonso Pueblo is from a private Colorado collection, originally purchased in 1972 from the Popovi Da Studio of Indian Arts