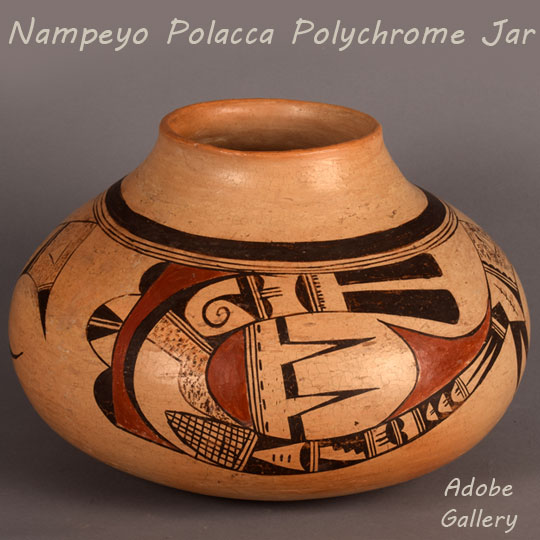 It is safe to say this inspiring pot by Rachel Namingha Nampeyo is one of a kind. In this case she was clearly experimenting, in more ways than one, and the result is a piece of pottery that enchants, surprises, and excites.  Many unique design elements spring upon the senses all at once when beholding this pot.

Potentially the most obvious feature is the sheer size—it is not common to encounter Hopi pottery of this magnitude.  Reminiscent of a summer gourd, a gigantic dew drop or even an aspen leaf, the shape is also special and very pleasing to the eye.  Furthermore, the pot appears to almost levitate, as its bountiful shape balances on a very small portion of its base.  In this way, the shape reminds one of a flower budding in the spring.

Upon close inspection of this jar, the spectacular orange blushing clay of Hopi has been covered in a cream Polacca slip.  This instills a lovely crackling of the surface and would typically indicate this piece to be much older than it is, for it is likely from the 1920s.  Polacca pottery style began around 1740. It did not fully become the predominant type at Hopi until about 1800, and it continued until about 1890. Polacca wares were created by Hopi potter matriarch and Rachel’s grandmother, Nampeyo of Hano until around the turn of the century.

This Rachel Namingha Nampeyo Large Historic Hopi Polacca Polychrome Jar is decorated with dark brown and red pigments and begins with a thick ring of dark brown around the top, just down from the jar's opening.  Three much thinner rings closely follow, and none are broken (like with a spirit line) which would indicate these to be simply decorative.

Two closely duplicated images of birds decorate the pictorial portion of the jar.  Although uniquely stylized, the birds are easily recognizable as they are in shapes almost true to their natural form.  Triangles for eyes are laid upon yucca-stippled faces and sweep down through a body decorated with rain clouds, kiva steps and maybe even corn in the belly.  Each bird’s form swoops around indicating tail feathers in an upward position, and are laid upon more geometrics common to the historic Sikyátki style of pottery for which the Nampeyo family is so well known for having revived.

Rachel Namingha Nampeyo (1903-1985) was the granddaughter of Nampeyo of Hano, daughter of Annie Healing and mother of Priscilla and Dextra. She was an accomplished potter recognized with an exhibition of her work in 1994 at the National Museum of the American Indian, Heye Center, New York, in Creation’s Journey: Masterworks of Native American Identity and Belief.  A large selection of her pottery is in the collection of the Museum of Northern Arizona, some as early as 1940 and as late as 1980.  She has been included in numerous publications for her contribution to Hopi-Tewa pottery.

Priscilla Namingha Nampeyo is quoted in Rick Dillingham’s Fourteen Families in Pueblo Pottery as saying “[M]y mother [Rachel Namingha] worked with Nampeyo and would help paint and fire for her.”  This could explain the use of Polacca slip on this jar as Nampeyo of Hano had experience with Polacca slip and may have influenced Rachel to try it.

Condition: There are some abrasions to the slip, and a few pits on the surface.  Additionally, there is some very slight wear to the base but overall, this Hopi jar is in very good condition.

Provenance: from a private collector who purchased it at auction, with documentation from a long line of Ogg family members (of Ogg’s Hogan). Ogg's Hogan sales tickets follows the line of ownership in the Ogg family as follows: “Purchased by Charles & Millie Ogg 1950s, descended to Jack Ogg 1980, and to Jeff Ogg 2008.  Sold by Jeff Ogg in 2011.