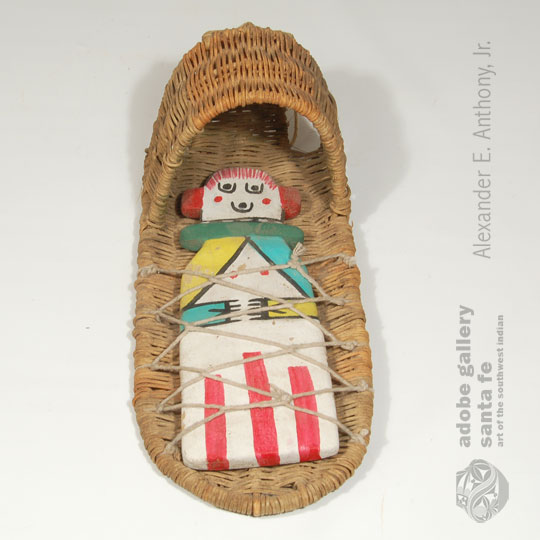 Hahai-i-Wuhti is portrayed as a sprightly grandmother, and she is the mother of all katsinas with a number of functions, one of which is the principle actor in the Water Serpent Ceremony. She is a very energetic, sprightly, talkative being.  It is her representation in doll form that is given to the very young Hopi babies and captive eagles. Her actions reflect her role overseeing the growth and proper behavior of children, so doll carvers often create her effigy as the first present a baby receives.

This Hopi doll was carved from a single piece of wood and painted with commercial paints.  It is not signed with a maker’s name, which is typical of dolls made for presentation, and not for sale.

The cradle for the katsina doll is named taapu in Hopi.  The outer frame is made of oak and extends the entire length of the cradle and is bent in a U shape. The warps and weft are constructed from scrub sumac branches.

Among Hopi material, this doll size wicker cradle with a doll strapped in is a relatively rare find, particularly of this age and in such excellent condition.

Condition: both doll and cradle are in very good condition with some expected wear.

Provenance: this Rare Hopi Hahai-i-Wuhti Katsina Doll in Cradle is from the collection of a family from Oklahoma