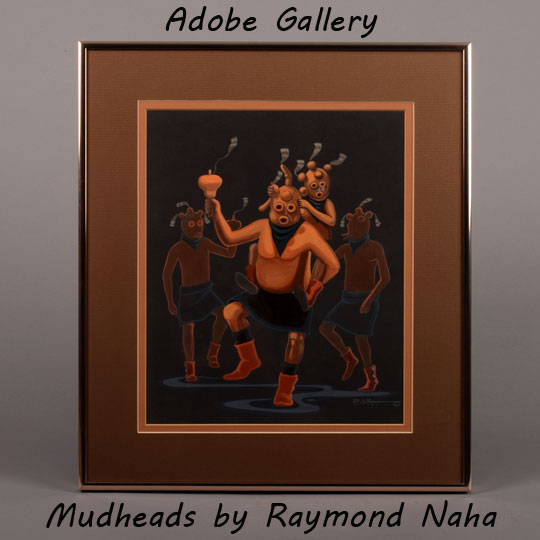 This untitled original painting was made by Hopi Pueblo artist Raymond Naha.  It is a fine depiction of a group of four cavorting Mudheads.  As usual, Naha’s work is deep and detailed.  He seems to have a particularly strong grasp on shading, as all his works that have passed through the gallery have made fine use of light and shadow.

In the center of the image, Naha placed a large mudhead.  He holds a rattle and carries a smaller mudhead on his back.  They’re lit up with a soft orange glow, suggesting that they’re dancing close to a fire.  Two more mudheads dance in the background, raising their rattles in a manner similar to that of the central figure.  With this small painting, Naha managed to create a compelling image using just a few colors on black paper.

The painting is signed R. Naha in the lower right.  It is framed in a thin frame under two layers of matting in complementary brown tones.

Raymond Naha (1933-1975) grew up being influenced by some of the most innovative Native American artists of his time. He was born on December 5, 1933, at Polacca, which is at the foot of the Hopi Reservation’s First Mesa.  He was the son of Daisy Hooee Nampeyo and Ray Naha, making him the great-grandson of famous potter Nampeyo of Hano. During his life he was influenced by a diverse group of people, beginning with his mother, who had left Hopi at a young age after Anita Baldwin, a wealthy benefactress from California, offered to help pay for eye surgery to rid her of cataracts. Baldwin sent Daisy to school at L'Ecole des Beaux Arts in Paris, where she studied sculpture and painting. Eventually Baldwin took Daisy on an around-the-world tour to see other kinds of art.  Daisy Hooee was Naha’s first teacher, and her influence shows in the European characteristics apparent in his paintings.  He exhibited widely and won numerous awards, including the Indian Arts Fund in Santa Fe in 1962. He died in 1975, leaving behind a large body of work.

Provenance: this Raymond Naha Original Hopi Painting of Four Cavorting Mudheads is from the estate of an Albuquerque family.