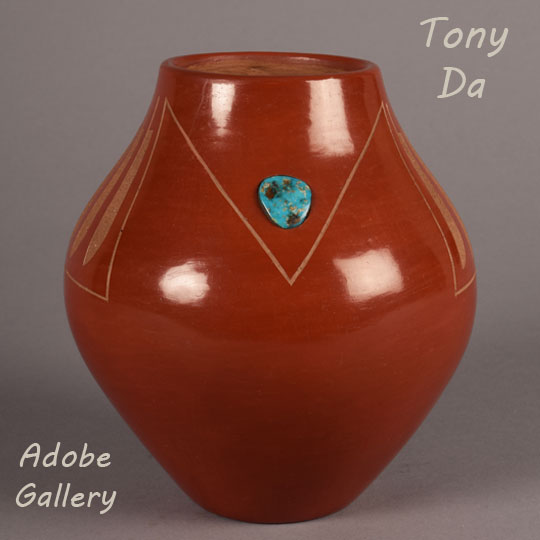 This redware jar was created by San Ildefonso Pueblo artist Tony Da.  Its form is one which we’ve not seen frequently: a vase, it could be called, standing about an inch taller than its width.  It’s an elegant shape, with gentle curves and a rim that is just a bit wider than the base.  Its red exterior is soft and rich, with a smooth and consistent polish giving the piece an alluring glow.

Da’s design work here is, as always, excellent.  Two groups of five sgraffito-carved feather designs appear, positioned on opposite sides of the jar.  They begin about a half-inch below the rim, becoming wider as they extend down the shoulder and reaching their ends at the jar’s widest point.  Two large, beautiful pieces of turquoise are set in the areas between the feather patterns.

A single line circles the jar, linking the turquoise and feather elements together and creating an appealing sense of movement.  It travels horizontally below the feather patterns and then turns at a right angle up toward the rim. From there, it moves diagonally down and then back up, forming V shapes below the gorgeous stones.  All together, these elements feel natural and fluid, which suits the jar’s tasteful form perfectly.  This is an exceptional example of Tony Da’s work. The bottom of the jar is signed Da.

Tony Da (1940-2008) Thun-Phoe-She (Sun Dew) was a gifted and influential potter, painter, and jeweler from San Ildefonso Pueblo.  His father was Popovi Da and his grandparents were Maria and Julian Martinez. Tony Da’s works are among the most collectible pieces of Native art, and not just because of his family name.  Tony Da was an innovative genius, whose natural artistic abilities matched—and, in some areas exceeded—those of his ancestors.  Tony Da’s career was unfortunately sidelined by a motorcycle accident in 1982, when he was just 42 years old.  After the accident, he was unable to continue making the elaborate and beautiful pottery jars, bowls, and figurines for which he had quickly become so well-recognized, but he was able to continue creating works on paper.  Da passed away in 2008 and has come to be regarded as one of the most significant Native American potters.

Provenance: this Tony Da Redware Pot with Feather Designs and Turquoise is from a private New Mexico collection