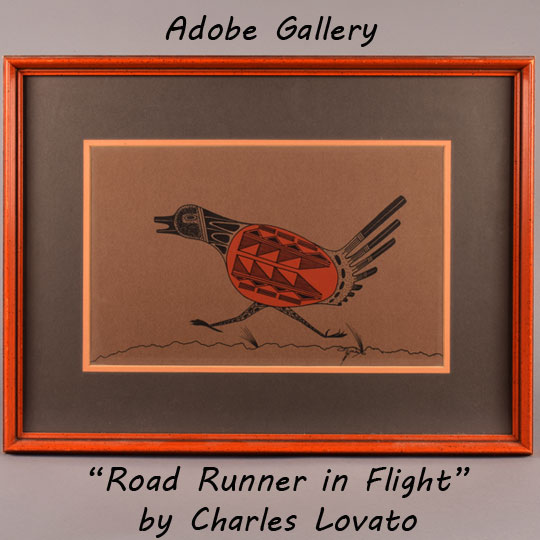 This original painting was created by Kewa Pueblo artist Charles Lovato.  Those who are familiar with the artistic histories of the pueblos will know Kewa Pueblo as the birthplace of an incredible amount of pottery and fine heishe jewelry.  Kewa Pueblo paintings, however, are not common.  This is often attributed to the somewhat conservative nature of the pueblo.  There are likely more Kewa painters today, but during Lovato’s career, he was one of just a few.

Lovato’s paintings are unique and appealing, and we are always pleased to offer them to our clients.  “Road Runner in Flight” is, stylistically speaking, in line with the Lovato pieces we’ve had in the past.  His roadrunner’s form is simple and elegant, with bold outlines defining the edges of its round body.  Within these outlines, a variety of textures and patterns emerge.  They seem to nod to the roadrunner’s actual physical appearance without resorting to straightforward depiction.  Note the long series of geometric patterns that travel along the roadrunner’s bright orange body—these could be interpreted as abstracted representations of the roadrunner’s wings.  Whatever Lovato’s intent may have been, this is a wonderful image with plenty to admire.

The painting is signed C.F. Lovato and dated “‘70” in the lower right.  It is framed in a wood frame with a bright orange stain.

Charles Lovato (1937-1988) of Kewa Pueblo was a man of many talents—painter, muralist, illustrator, poet, and craftsman. His paintings were unique, and largely unrelated to Pueblo traditions. As a jeweler, Lovato made heishe (shell) necklaces, for which the Pueblo is well known.  At an early age, he was adopted by his grandmother, Monica Silva, who was a potter. He served in the U.S. Military. He also studied art under Jose Rey Toledo in Santa Fe. After 1967, many of his paintings were accompanied by one of his poems. He explained that sometimes the poem came first, and sometimes they were written in response to the painting.  Charles Fredric Lovato died in 1988 at Kewa Pueblo in New Mexico.

Condition: excellent condition, a light impression around the outer edge from a previous matting

Provenance:  "Road Runner in Flight" by Kewa artist Charles Lovato is from the large collection of an Albuquerque family