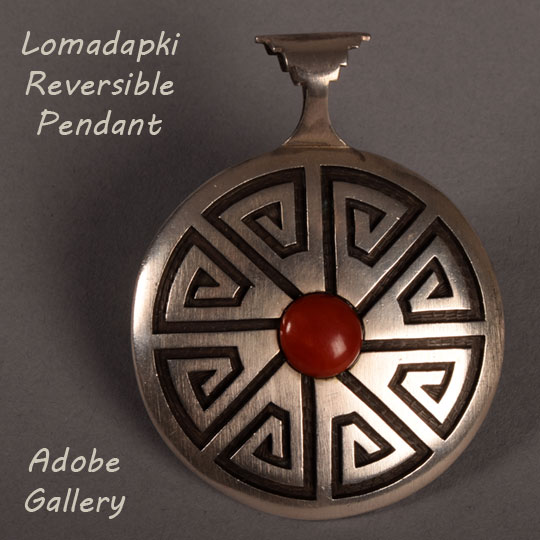 Coral and lapis gemstones were set on opposite sides of this Hopi silver overlay pendant made by Robert Lomadapki. One side features a coral center with geometric lines radiating from the center, resembling a shining sun.  The opposite side has an oblong lapis gemstone set in a deep shadow box, surrounded by overlay designs, perhaps representing dark night skies.

The Hopi overlay technique was introduced by Mary Russell Colton at the Museum of Northern Arizona in the 1930s. She recognized the need for Hopi silversmiths to have a distinctive style.  Along with the assistance of Hopi silversmiths like Victor Coochwytewa, a unique style based on traditional Hopi pottery and textile designs was developed. The technique, called overlay, involves two layers of silver sheets—a design is etched into one sheet, which is then set onto a second sheet with a cut out design allowing the lower sheet to show through. The top layer is polished and the bottom layer is darkened by oxidation.

After World War II, the Indian Education division of the Department of Interior developed a silversmithing program for returning Hopi veterans. These programs were taught by well-known silversmiths Fred Kabotie and Paul Saufkie. By this time the distinctive overlay style was associated with artists from Hopi. It is this style that Robert Lomadapki employed on his amazing jewelry pieces.

Robert Lomadapki was born in 1942 at Hotevilla on Hopi’s Third Mesa. In the 1970s he was part of a program at the Museum of Northern Arizona where he was able to collaborate and study along with Duayne Maktima and Victor Beck under the mentorship of Jake Brookings. He is known for making Hopi overlay jewelry since the 1970s.

In 2008, Robert Lomadapki (1942-2015) was named an “Arizona Living Treasure” for his dedicated work in education in the Native American community.  Not only was he a talented artist, he was an educator and a gallery owner who spent his time encouraging and promoting the careers of young artists.  He spent the last years of his life in the Applied Indigenous Studies department at Northern Arizona University as a traditional knowledge scholar.  He was also the owner and operator of Isvaki Gallery in downtown Flagstaff, Arizona.

This pendant was purchased by Marvin and Betty Rubin in 1986 at the Museum of Northern Arizona. Robert (Bob) Lomadapkithe signed this pendant with an etched signature B Lomadapki Joshweseoma.

Condition: this pendant is in excellent condition.

Provenance: this Robert Lomadapki Reversible Hopi Overlay Pendant with Coral and Lapis is from the estate of Marvin and Betty Rubin

Recommended Reading: The Beauty of Hopi Jewelry by Theda Bassman