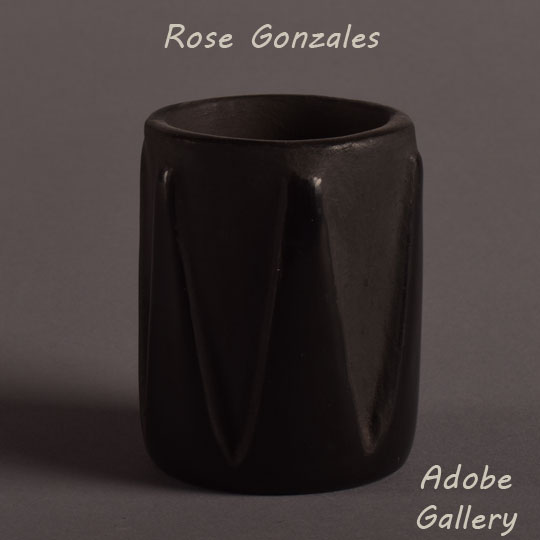 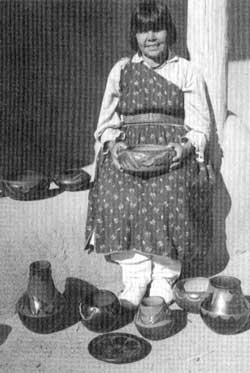 This black-on-black small cylindrical pottery jar by Rose Gonzales was carved in the typical style the artist.  She practiced at San Ildefonso Pueblo, a pueblo where carved designs were not standard practice, but it was a design Rose brought to the pueblo from her native San Juan Pueblo.

Rose's parents had died from the swine flu epidemic of 1918, leaving Rose and her sister Pomasena orphaned. The girls survived by staying at the Santa Fe Indian School. Mary Cata, a relative, adopted and cared for the girls.  After marriage, Rose lived at San Ildefonso for the remainder of her life.

Rose Cata Gonzales (1900-1989) shared her knowledge of the processes of pottery production with Juanita Archuleta Gonzales, formerly of Taos Pueblo, when Juanita married Luis Wo-Peen Gonzales and moved to San Ildefonso with her new husband.  Juanita Wo-Peen Gonzales made black carved pottery since she had learned the process from Rose.

Small items, such as this cylinder, had no function in a pueblo household.  They, along with other non-traditional shapes, were made solely to be sold to tourists, collectors, and visitors to the pueblo.  They became treasures proudly displayed in a household as reminders of a visit to the Southwest.

Provenance: from the collection of a local resident