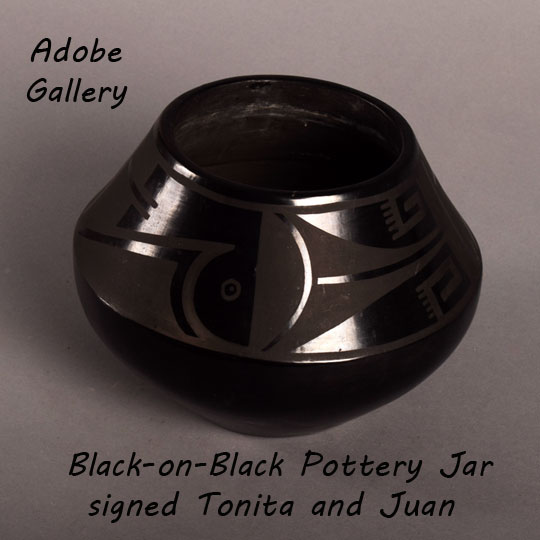 The significant design on this pottery jar by San Ildefonso Pueblo artists Tonita and Juan Roybal is an abstract design of a bird-note the eye and extended feather. Additionally, a pair of stylized birds, one above the other, is the additional design. Each design was repeated on the neck of the jar.

This is an exceptional jar by Tonita Martinez Roybal (1892-1945) and Juan Cruz Roybal (1896-1990) of San Ildefonso Pueblo, signed Tonita + Juan. Tonita had married Juan in 1916, so this jar was made in the period 1916-1945.  Tonita has been called one of the finest potters at San Ildefonso Pueblo. She was easily equated to Maria Martinez. Tonita consistently produced the finest blackware, with high burnish, deep color, and impeccable construction.  Juan is believed to have painted most of Tonita’s pottery after 1930.

Santa Fe dealer and collector, Richard M. Howard, was probably the single-most enthusiastic admirer of pottery by Tonita Roybal.  He believed she was probably the finest potter at San Ildefonso in the first half of the twentieth century but was overshadowed by fame bestowed on Maria Martinez.  Over a number of years, he put together a collection of perhaps one hundred pottery vessels by Tonita and his collection was displayed and sold by Nedra Matteucci Galleries in Santa Fe in 2007 just shortly before Mr. Howard passed away.