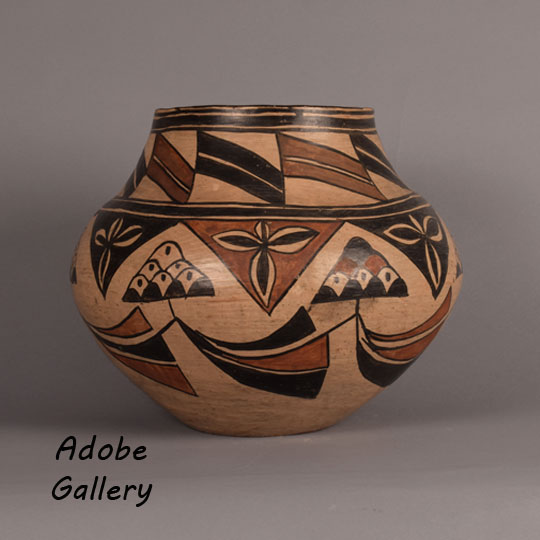 This outstanding polychrome olla was created by Martina Vigil and Florentino Montoya of San Ildefonso Pueblo. Martina created the jar, and Florentino handled the painting. These influential artists worked long before signatures became the norm, so the piece is unsigned. Their work has been thoroughly documented and is instantly recognizable, so we're able to make the attribution with confidence. Confirmation from a friend of the gallery—a notable San Ildefonso potter with deep knowledge of his Pueblo's artistic history—reinforces our assertion that the piece was made by Martina and Florentino.

Thanks to the presence of a traditional San Ildefonso stone polished slip, this piece can be dated to the late 1800s. Later works by the pair made use of a rag-wiped Cochiti slip, which they introduced to many of their peers shortly before moving to Cochiti in 1905. Though it does not show considerable wear from use, the olla's age is both tangible and visible.

Two design bands circle the exterior of the olla. Up above, a traditional pattern appears around the neck, with pairs of parallel diagonal forms repeating in red and black. Thick black framing lines appear above and below the upper band, separating it from the lower design band. For the lower band, which claims the majority of the olla's exterior, Florentino moved beyond traditional designs and into more expressive territory. Triangular forms hang down from the framing lines, also alternating red and black. Plant designs in black appear within these triangular forms. Within the blank space between these forms, inverted rain cloud patterns appear. Subtle variations exist within certain repetitions of this pattern. Vertical lines emerge from their centers, linking the patterns to larger curved elements down below. While each individual design is strong, what's most impressive is the way the seemingly disparate elements work together to create a larger image. It feels fluid and expressive, with bold pigments intensifying its power. Martina's vessel shape has more in common with utilitarian wares of the period than it does some of her more distinctive forms—a wise decision, as the vessel's elegant nature matches that of the design. This is a truly exceptional example of historic San Ildefonso polychrome pottery.

Martina Vigil (1856-1916) and Florentino Montoya (1858-1918) were a married couple from San Ildefonso Pueblo. As Jonathan Batkin has documented, there were several outstanding potters at San Ildefonso Pueblo during the late 1800s and early 1900s whose work can accurately be associated with their names. Following publication of Batkin's studies, it has become easier today to identify late 19th and early 20th century pottery to artists with some degree of accuracy, or so we hope. Due to their unique style, Martina and Florentino are among those artists whose works can be accurately identified. Martina and Florentino were cited as a major influence by Maria Martinez. As of 1999, one of their works held the record for the highest price paid for a single pot in the Western Hemisphere.

Condition: this Martina and Florentino Magnificent Polychrome Jar is in excellent condition, with a few minor abrasions and chips. The jar has been examined under a blacklight and shows no signs of restoration or repair.

Provenance: this Historic San Ildefonso Polychrome OLLA with Rain Cloud Designs is from a private collection

- The Legacy of Maria Poveka Martinez by Richard Spivey